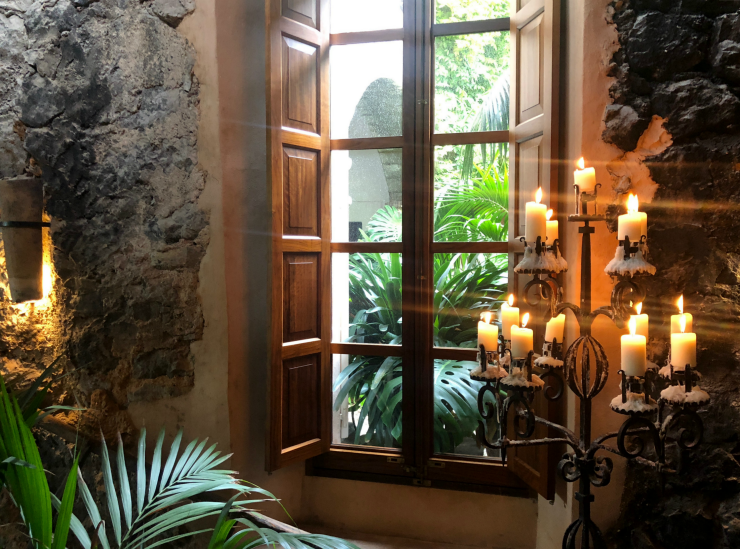 There are certain things that just seem made for me. I see it and instantly I know that it was put in front of me for a reason. This is what happened recently when I saw the Ananda Mallorca yoga retreat on Instagram. Sure, maybe it was put in front of me because of geo-targeting and because I check a bunch of criteria such as being female, of a certain age and living in Barcelona, but who cares! If all of this lead me to Ananda Mallorca then halleluiah! And proof Instagram ads work, people.

I am not a hardcore yogi but as you may know, I am a runner and I am extremely active. Anything fitness related or being outside pretty much fills up my happiness cup. I’ve gone back and forth with yoga for years, and while I stretch quite a bit after running it is not the same as doing an hour of yoga. I have been wanting to practice more yoga because I know that it would help me not only physically but mentally as well. So back in September when I saw that Ananda Mallorca had a yoga retreat running in October, I gasped, clicked, read more, and even DM’d them asking if there were still spots open! I quickly realized that I could not get away that specific weekend and I was bummed. This retreat looked magical and just the type of thing I needed. But then, as luck would have it a few weeks later they posted about adding one last-minute retreat for the year the first weekend in November.

So there it was put right in front of me AGAIN, I quickly looked at my calendar, saw that nothing was planned for that weekend, got chills and decided without a doubt, I’m going! 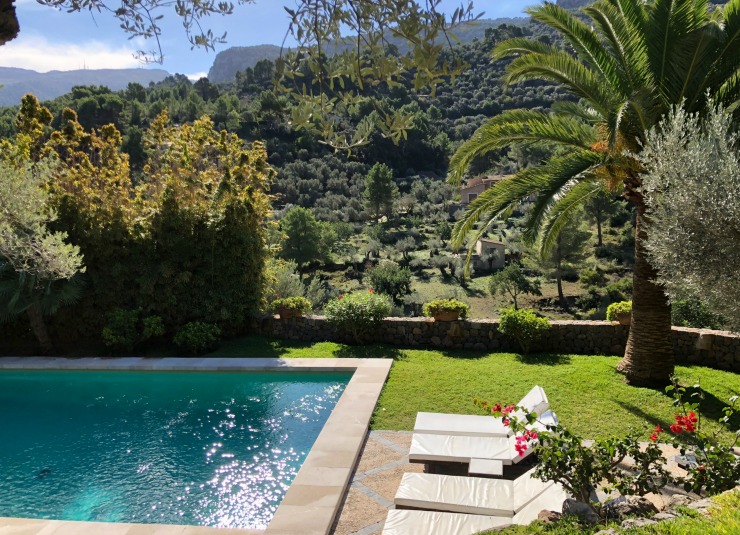 Ananda means bliss and this name could not be any more perfect for what you will experience at Ananda Mallorca. I knew from some of the photos online that this yoga retreat looked like it was held in a pretty ideal setting, some sort of old world estate surrounded by the green beauty of Mallorca. I had no idea where exactly on the island it was, but it didn’t really matter because wherever it was it looked like the definition of serenity. Later I would learn that Ananda Mallorca is located in Sòller, on the northwestern part of the island and about a 30-minute drive from the Palma airport.

Pulling up to Finca Son Salas, the beautiful 16th-century estate I was speechless and my body was tingling. It’s hard to describe but I thought, if someone was filming me getting out of the taxi it would look just like the opening scene in The Bachelor when the girls pull up and step out to meet the man of their dreams. Except I was meeting the Mallorca yoga retreat of my dreams! Good lord. I let out a sigh as I looked around and gave myself a little pat on the back for knowing myself well enough to know that, yes, THIS was meant for me.

This sensation of all over body tingling doesn’t just happen anywhere, but I can recall the same type of feeling when I arrived at Hacienda Petac, my love for hiking the Las Catalinas trails and arriving at La Carolina Lodge for the first time. All of these places brought me so much zen and release they literally brought me to tears and Ananda would eventually do the same. 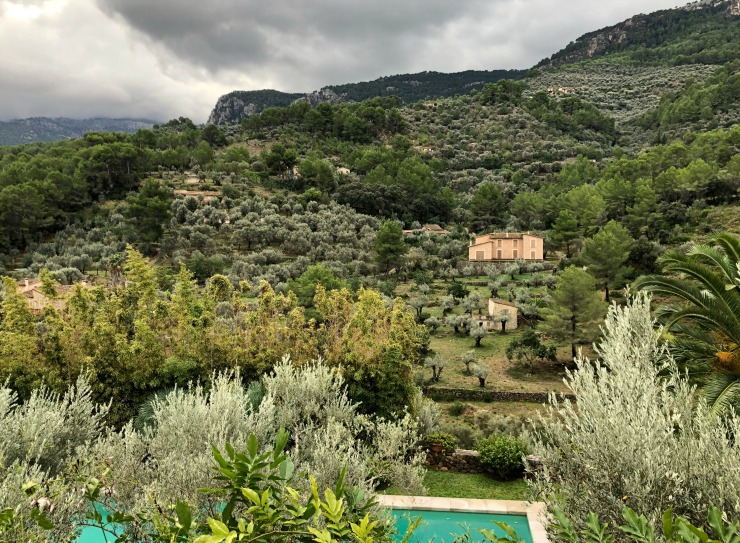 Nadine and her husband Nicolas were our hosts and they showed me around as soon as I arrived. I learned that Finca Son Salas has been in Nicolas’s family for 40 years and that he actually grew up here! After many years of renovations and, once all of his siblings had moved on and his parents were traveling more, they started to rent out their gorgeous nine-bedroom estate for weddings and retreats. Finca Son Salas has even had some very high-end clientele and even a few celebrity guests.

Until recently, the retreats held here were organized by third parties who would rent the finca in its entirety. Recently, however, Nadine decided to create her own yoga retreats, which is how Ananda Mallorca came into being. Nadine is the perfect person to create these yoga retreats because she literally embodies this healthy lifestyle daily. Her and Nicolas are the most thoughtful, caring, smart, delightful and gracious hosts. 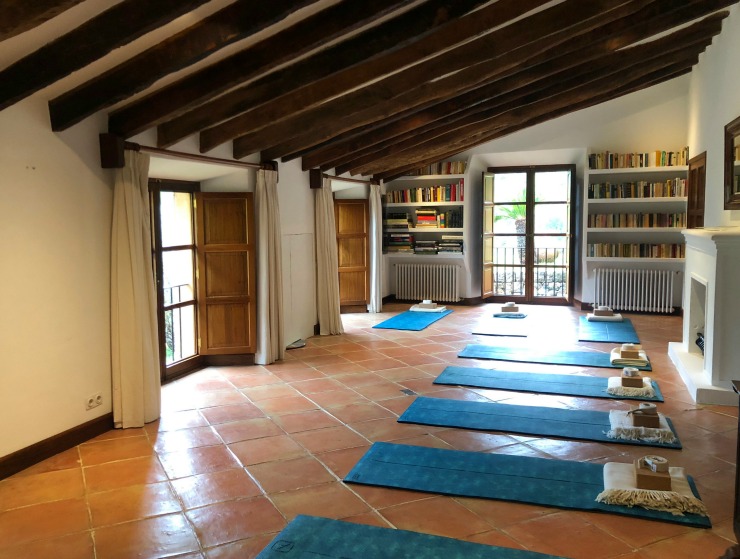 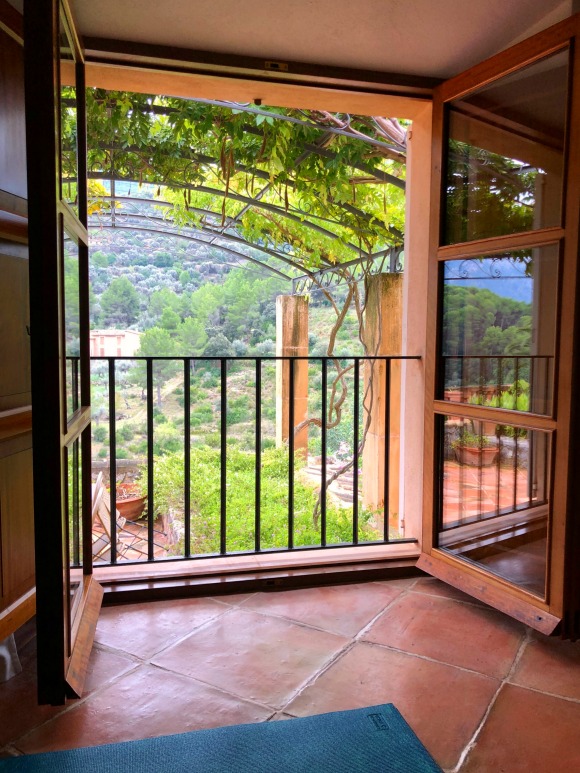 Right now the yoga studio is in the main part of the house in a lovely room that has large windows and overlooks the countryside. There is enough space for about 10 students and the teacher. I loved finding my spot next to the window and only chose another spot once, but then went back to my window because I just loved the view and the breeze. They are currently renovating another building that sits on the property that will be a proper yoga studio, and it will be ready for their retreats in 2019. We did yoga every day, and one day we did a morning and evening session. Over the four days, we did five classes and the yoga instructor was excellent! We were a very mixed group of ages and yoga abilities and I thought the classes had a very nice flow for all levels.

It was here next to my gorgeous window at the end of yoga class, while deep in Shavasana I completely lost it and burst into tears out of nowhere! I was a little embarrassed because I am sure it was just loud enough for everyone to hear, but especially the woman next to me. Who after class came up to me and gave me a hug. Gah.

One of the other activities during the retreat was a three-hour hike to see a little bit more of the island, which was a great way to get up and move our bodies off the yoga mat; I loved that this was on the schedule. Nicolas was our guide and we made our way through a variety of terrain, met some donkeys along the way and came around to see the beautiful coastline and the Port de Sòller. I’m pretty athletic and physically fit, but after all that yoga and a three-hour hike, even my body was feeling it! Lucky for me my massage was scheduled for right after the hike, which was just what I needed.

Everyone at the retreat gets a complementary treatment, and I bet you’ll never guess where my massage was…inside the little chapel that is on the property. You might think that would be a little awkward or creepy, but it was the cutest thing ever! The chapel is not full of weird statues or a hundred crosses or photos of Jesus. In fact, it was very minimal in decoration, all I can remember was the flickering candles and a massage table. 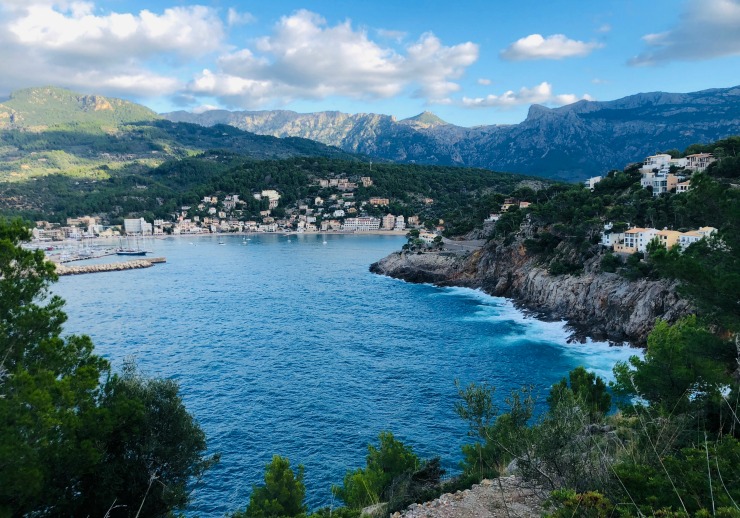 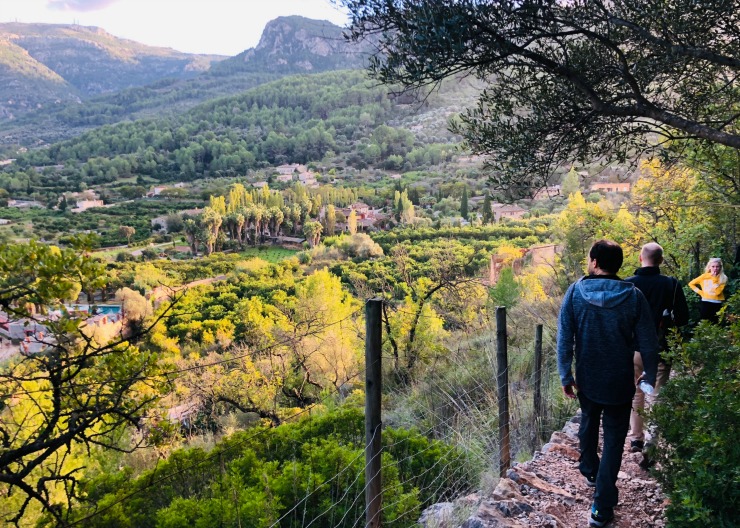 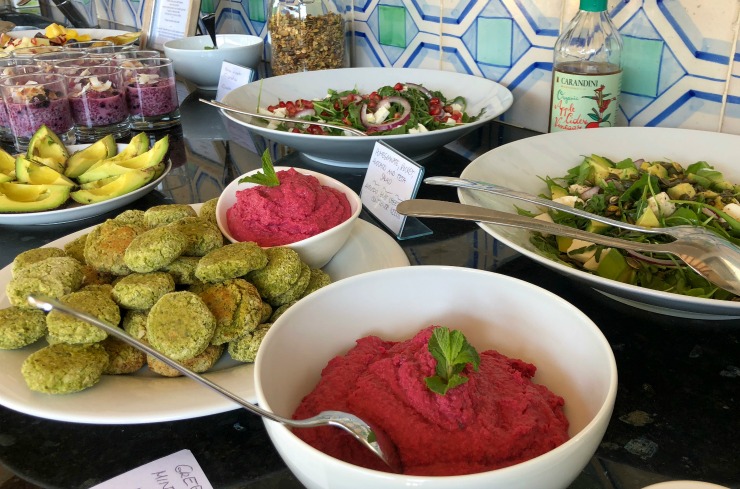 During this retreat all meals were vegetarian, super healthy and super delicious! In charge was Suzanne Garaty, chef and nutritionist from Vital Nutrition and she also gave a one-hour nutrition workshop, which was included in the package. During the retreat, Suzanne was also open to discussing certain topics one-on-one or scheduling further consultations with her as well. Her assistant in the kitchen was Anja, a lifestyle and food designer at vitanja_lifestyle. Both of these ladies were a wealth of knowledge and every meal was a beautiful spread of delicious, creative colorful food. You can also find Suzanne Garaty the over on Instagram as vitalnutrition.es .

During the retreat the weather actually did us a favor, it was a bit cold and rainy when we first arrived so we dined in the cozy candlelit dining room; most guests opt for sitting outside because it’s so beautiful. But as the weekend progressed the sun eventually came out so we were also able to enjoy the outside dining room with impressive views. We were truly spoiled no matter where we sat. 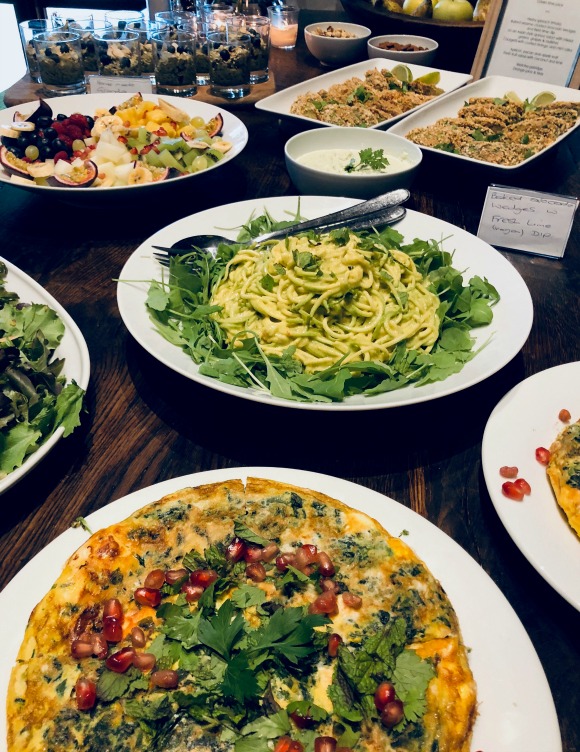 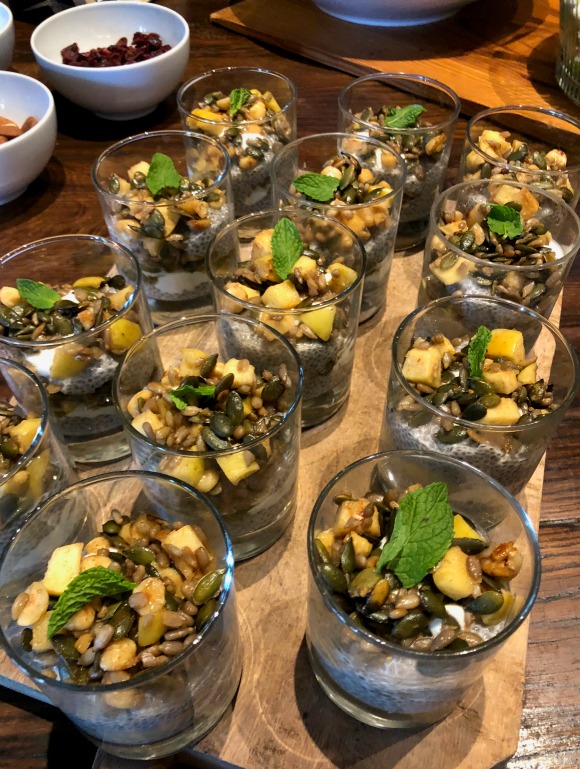 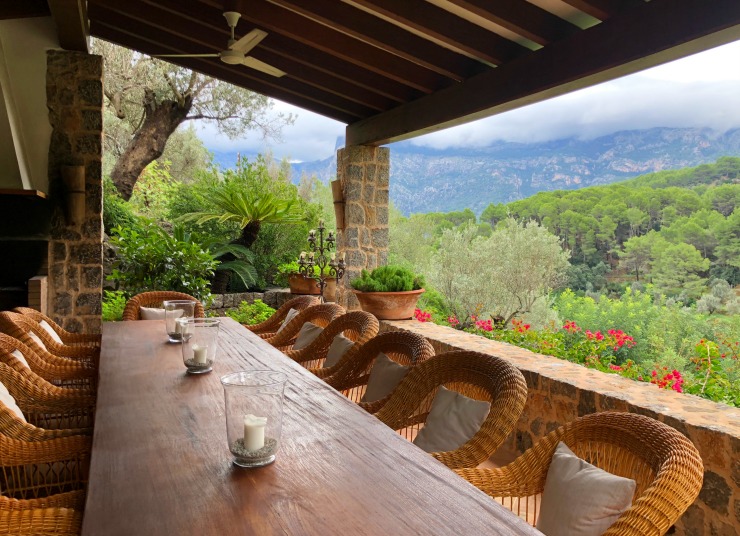 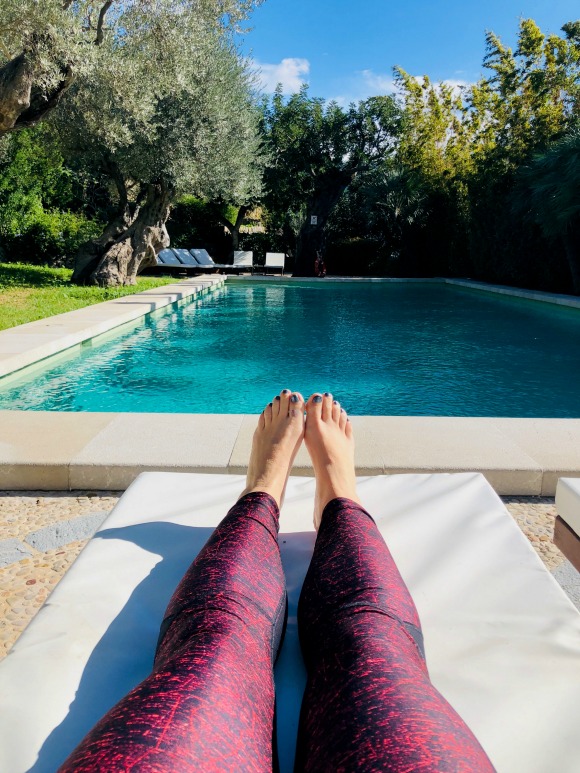 From the minute Nadine greeted me, to hugging both my host’s goodbye, everything was thoughtfully planned, prepared and taken care. I have not written on the blog for a very long time. I have been a bit uninspired and well, struggling with a few things lately, and so my writing has all been kept a little more private. But it’s experiences like this that make me want to literally scream and share it with everyone!! It’s also easy to write because it just comes out oozing from the heart. The biggest thing I took away from my time at Ananda was the word “exceptional”. I hardly ever use that word, but I found myself saying it a few times while at Finca Son Salas and even wrote about it. It’s a word that is still ringing over and over in my head – and well, it may have just helped me turn a pivotal corner. Which I know is vague, but maybe I’ll explain more another time…

If you are traveling in Spain or visiting Barcelona, I highly suggest you jump on over to Mallorca, or if you live in Europe check the flights and get yourself to an Ananda Mallorca yoga retreat in the new year! You can visit their website for more details. You just may see me there;) 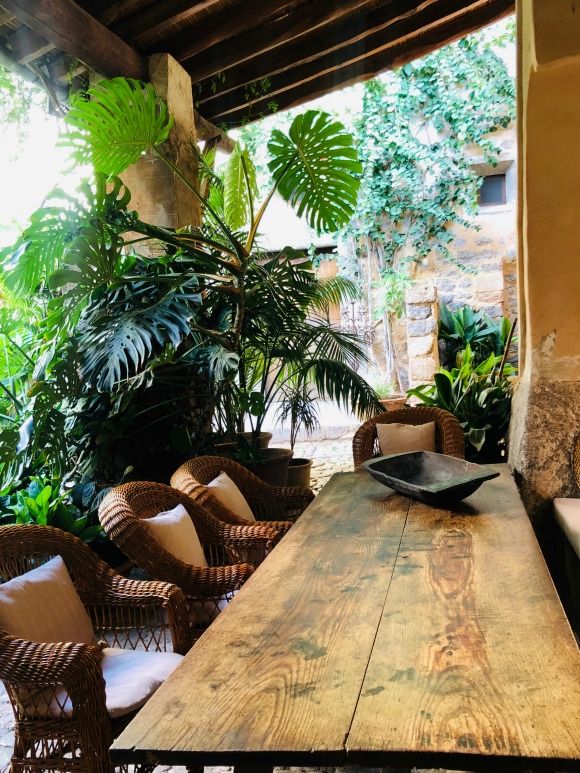 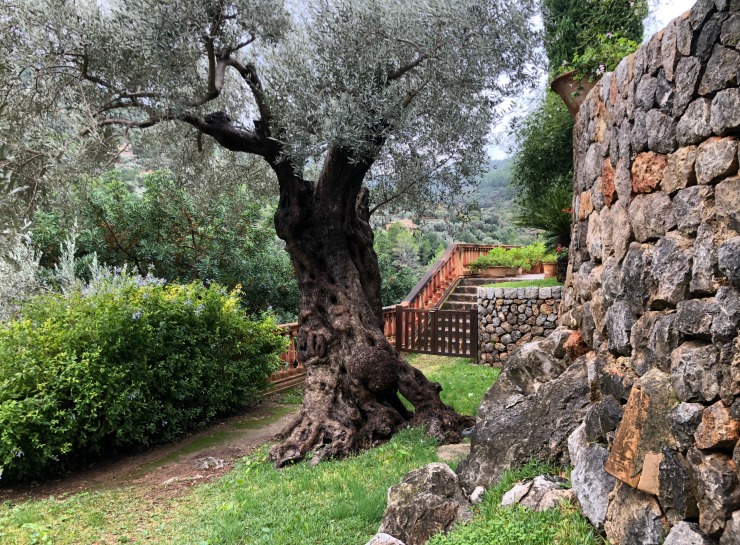 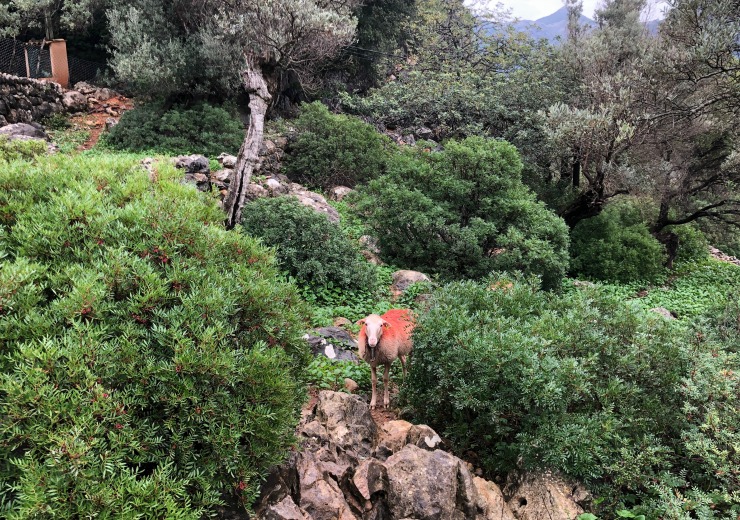 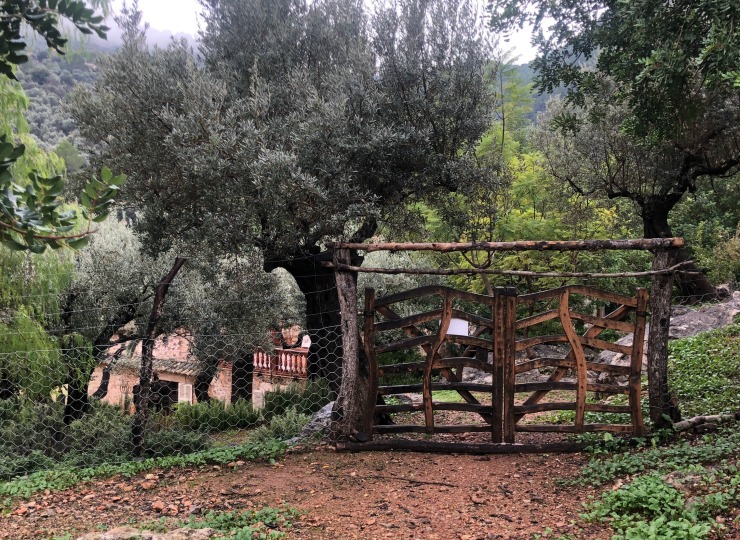 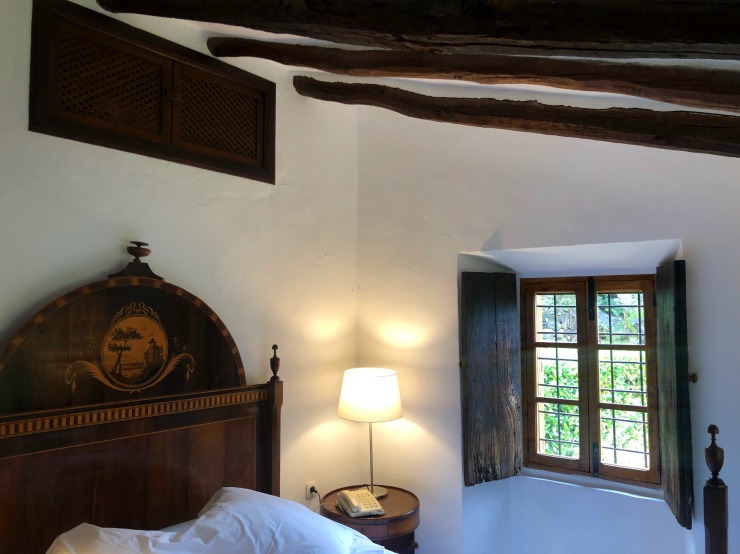 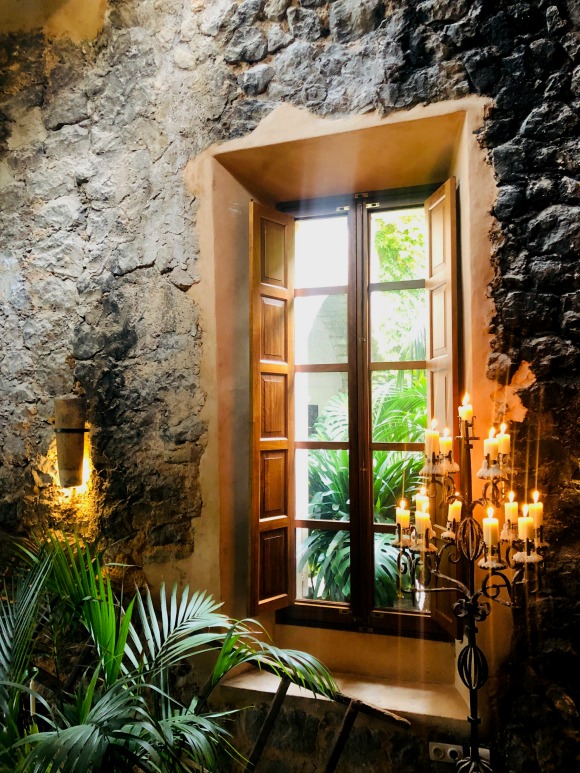