Recipe for the Best Weekend in Barcelona

So last weekend was wonderful. SO wonderful that I wanted to share it. Have you ever had one of those weekends that made you think – wow, life is good. Really good. I’m going to recap it here for any of you that care. If you’re visiting Barcelona, you may want to take some notes to make your own recipe for your best weekend in Barcelona itinerary.

A friend was going to be in town for Mobile World Congress (the biggest tech conference in the world). This conference happens every year in Barcelona. Another conference that happens at the same time is 4YFN, which Harris found very interesting so he went again this year. Anyways, my friend Rebecca was staying at my FAVORITE hotel in Barcelona, which just so happens to be practically across the street. She’s a runner and while she lived here we never ran together. But we follow each other on the Strava app so it’s fun to still keep up with her on there. So, I swung by the Cotton House Hotel to pick her up for my usual Friday morning beach run. I don’t usually like running with people but this was a special occasion. I liked sharing my run with my friend, and not just on my app. 🙂 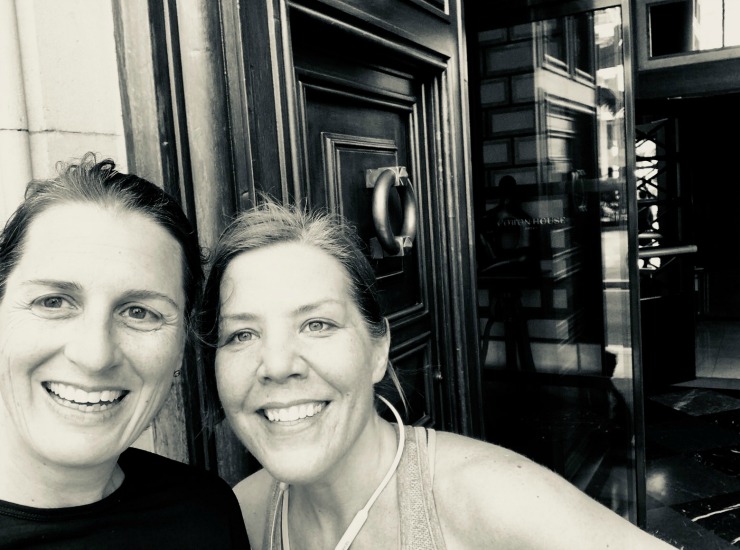 After our run I dropped her off back at the hotel and we snagged this photo. It’s black and white  – because no one looks good in a photo after running 5 miles. One of the workers from the Cotton House came out and gave us water and I laughed and said “I bet he thinks I’m your personal trainer in Barcelona.” HA!

Running with friends is fun.

While Rebecca was here we had dinner plans with our other friend Lisa and my husband Harris (he’s like one of the girls). The four of us went to Els Pescadors, in Poble Nou, a bit further away than we usually go. But I had heard about this restaurant, and whatever Lisa books is always excellent! We met up at the CH for a pre-dinner drink and then off we went. BUT FIRST – the Cotton House Hotel is to die for. It’s my favorite hotel (maybe ever) but in Barcelona for sure. While I haven’t been to all of them (yet), but I’m pretty sure this one will be hard to beat. I’ll do a full feature of it another time, but for now here are a few pictures. I think you’ll see what I mean. 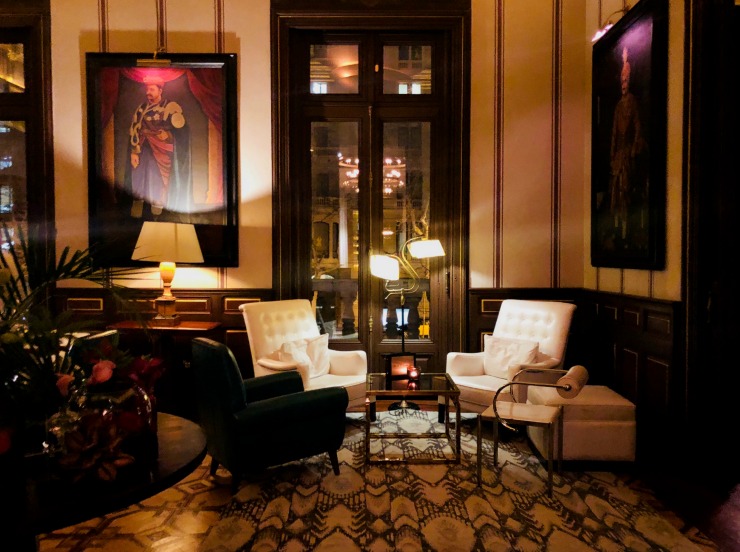 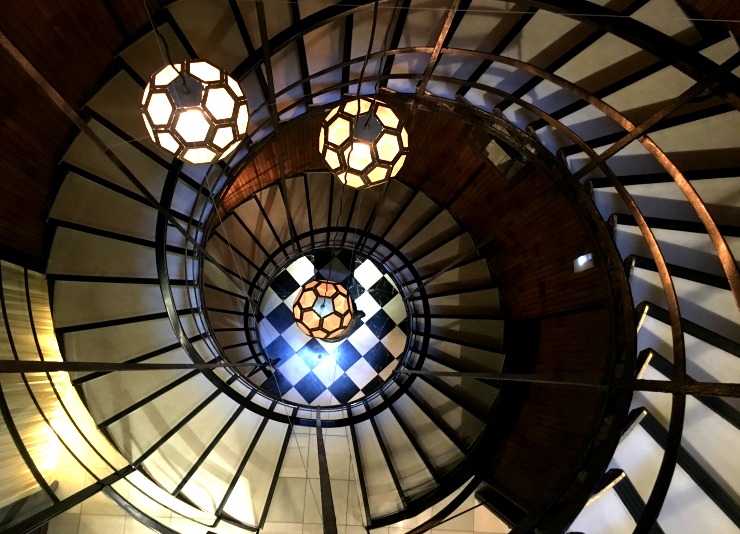 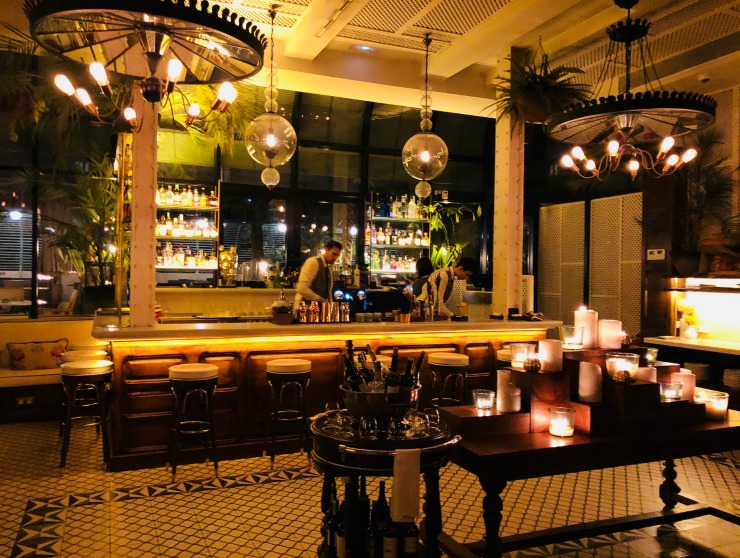 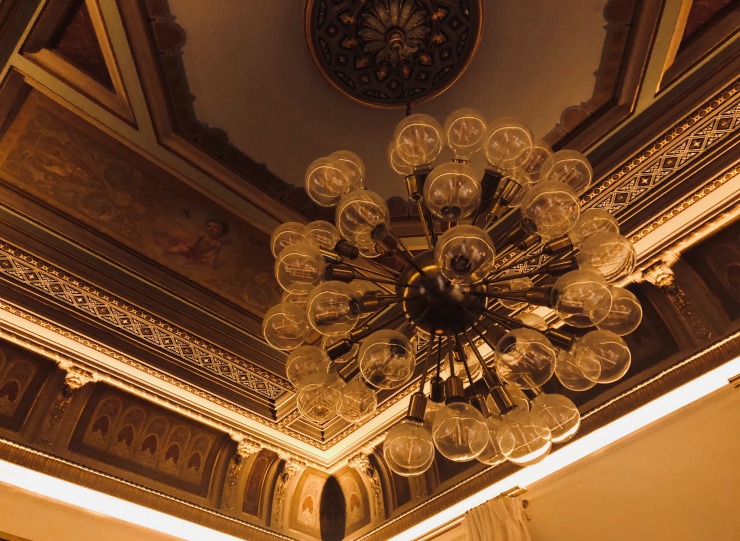 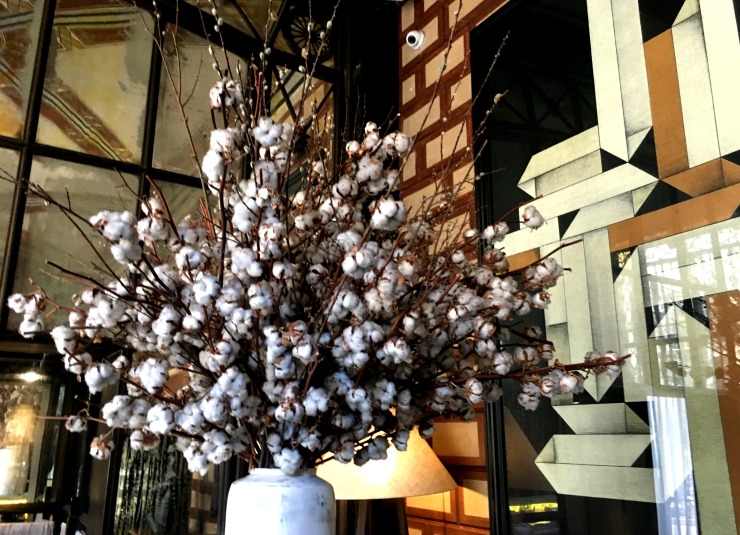 Okay off to dinner at El Pescadors… 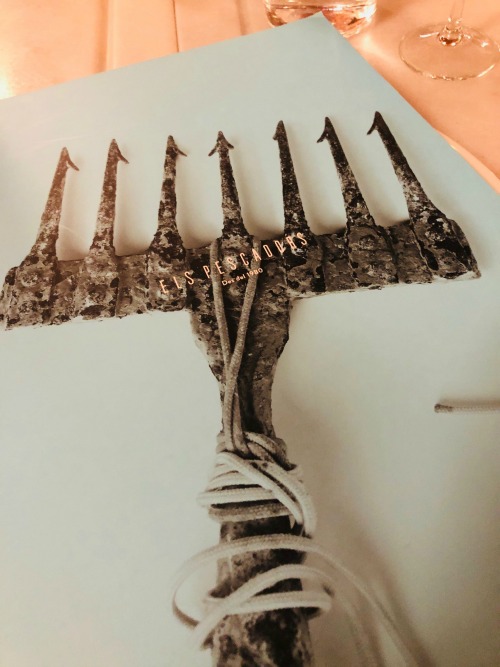 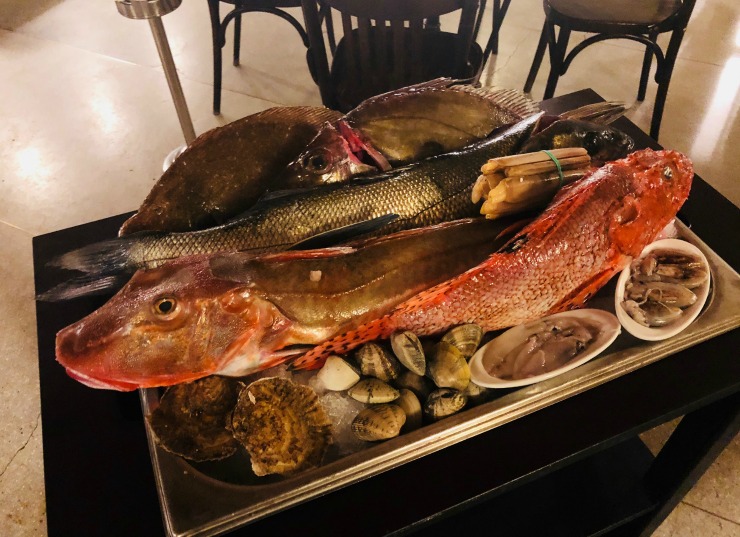 I wasn’t really sure what to expect when we got to Els Pescadors, but we arrived a little after 8:30 and we were the only ones there (they open at 8:00 pm). It was a very traditional looking restaurant, dark wood and white tablecloths. From the name of the restaurant, it was obviously all about the fish here. If you live in Barcelona you quickly get used to the fish being served with the head “la cabeza,” but that is nothing compared to the fish cart that was wheeled out for our menu presentation! Oh, this is going to be GOOD.

The waiter proceeded to tell us about all five of the fresh catches of the day, how the chef would prepare each one, and what vegetables and sides would accompany the fish. I didn’t understand some of what he was saying, but it didn’t matter. I knew whatever we picked was sure to be amazing!  Meanwhile, while we were engrossed in our dinner and conversation the entire restaurant filled up. We started with a glass of Cava, as you do in Barcelona, we had a few appetizers and the chef came out and suggested a bottle of white wine to go with our fish selection, and the fish was delish!

It was a glorious day outside! Glorious. My kids were doing the usual lazy Saturday morning thing. Late that afternoon they were each going to have a friend over for a sleepover. Harris was totally consumed with a new project for work, so it looked like I was going to be solo for the day. Woohooo! I have more energy then my entire family, and usually I give them some grief about being lazy or working. But today I let it go, but I certainly was not staying home.

One of the things that has been on my list to see in Barcelona is the San Pau Hospital, so today was the day.

Since I wasn’t running today, I walked the 2.4 miles to the hospital. I could have taken the bus but it was SO nice outside I wanted to enjoy the day. I made a quick stop at Chica Limona for a cappuccino and croissant and read my book a little. Then I continued on my way passing La Sagrada Familia, buzzing with tourists as usual. I made my way up the Rambla de Gaudí which leads you directly to San Pau Hospital. I usually do not go north of the La Sagrada so I had never even seen this rambla before, but it’s great. You can sit at a cafe and admire La Sagrada from a distance. Then just five blocks up towards the end of this rambla you literally run right into San Pau Hospital. 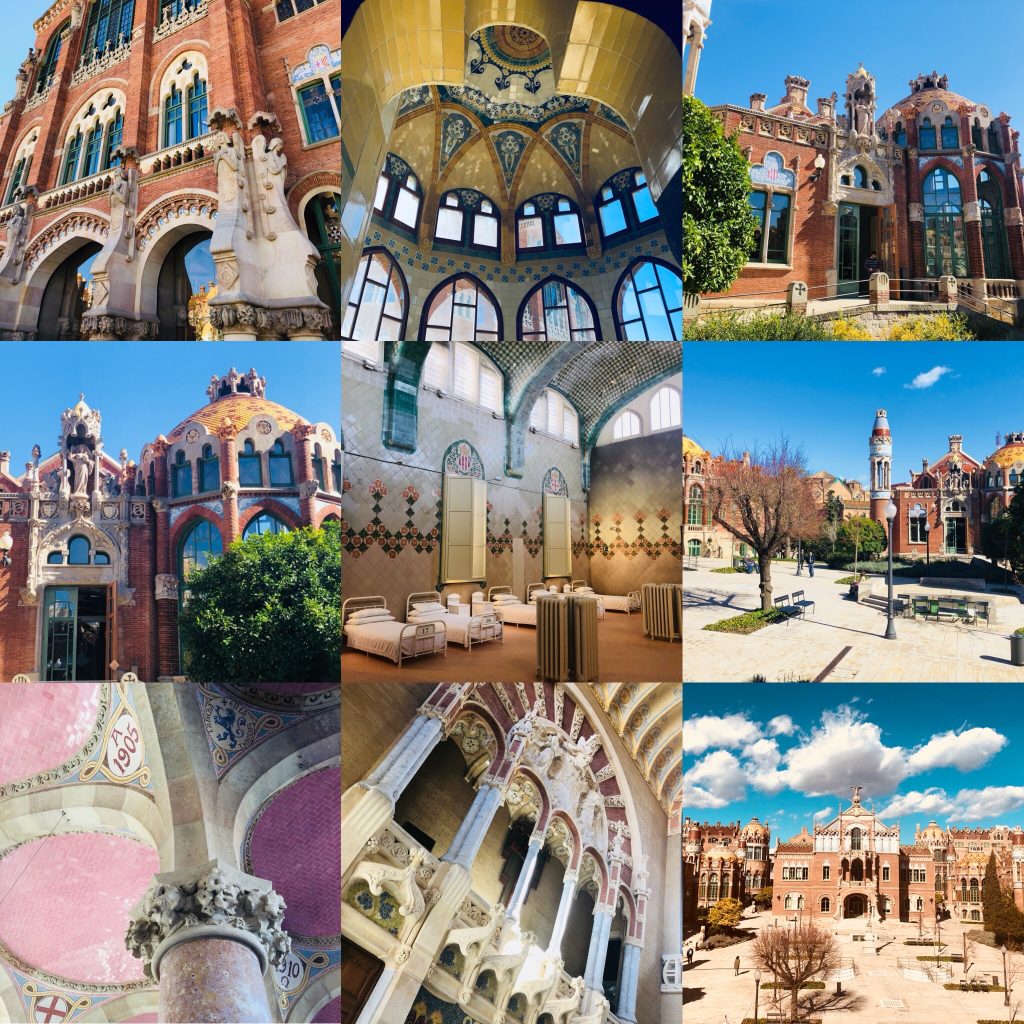 I CANNOT get over this place. I am kicking myself that it took me so long to come and see this magnificent architectural beauty!

Back in 1930 this was one of the biggest hospitals in Europe. It is essentially six hospitals in one and they call it a city within a city. This is the brilliant work of the famous architect Lluìs Doménech i Montaner (yes, there’s more in this city than just Gaudí). Montaner is also the creative genius behind the Palau de Musica and several private homes in Barcelona, including Casa Lleó Morera that sits on the same block as Guadí’s Casa Battló.

I really do not understand why more people do not talk about this!! It is ridiculously gorgeous, and no one was there. Everyone was swarming La Sagrada, which is totally understandable. But this is SO worth seeing and it’s so close to La Sagrada. Not every building was open, but there are even underground tunnels that you can walk through! I was fascinated by the room in which hospital beds had been set up as they were back in the day. Honestly, this looked like a hospital in heaven. When I die, I’m totally getting one of those beds.

Even the room that had all the in-depth information and history about San Pau was displayed on the coolest structures. And the aqua blue tiles – sigh.  I entered the main building last and l had a hard time taking it all in. The colors, the textures, the tiles, the stonework, the windows, the columns, the statues, and funky stone formations – my neck was so sore from twisting and turning to see everything from every angle. I was seriously OD’ing on visual stimulation. 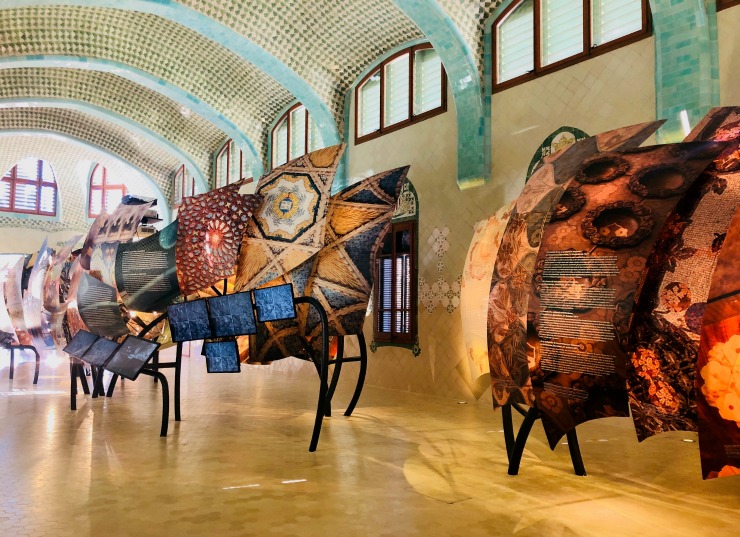 Eventually, I forced myself to leave so I could get back outside and enjoy the sun and the rest of the day. On my way home I sat down at a little cafe on Gaudi Rambla and had a Clara (beer with lemonade). Many of the restaurants were very busy as it was 3:00 pm, lunchtime. I was almost home when I remembered that a new place had opened up on Gran Via, called Colette. So I stopped in there and had a few tapas. 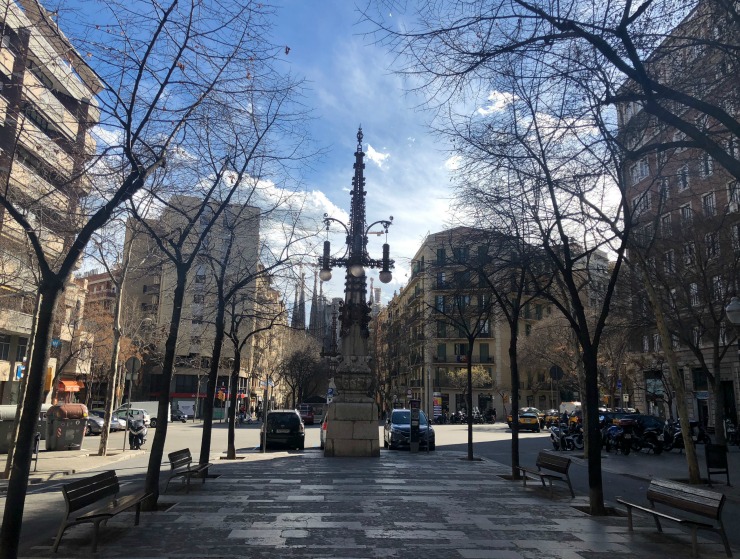 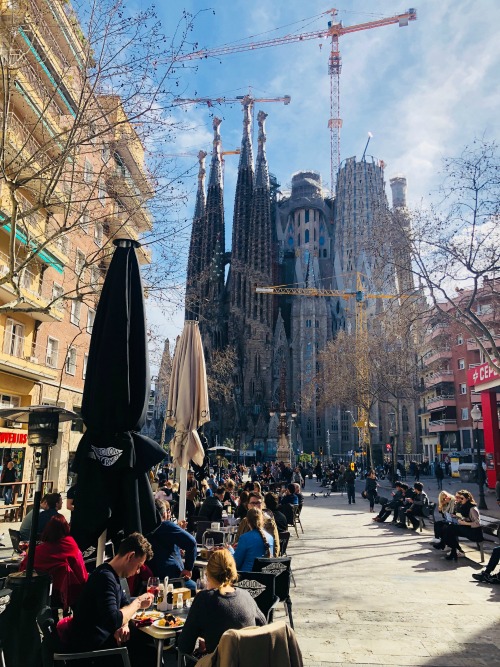 I went home to check in on my family. Hudson and his friend were playing video games. McKenna and her friend were out walking around and getting bubble tea at ZenZoo. Harris was still working. I finished some laundry, thought about jumping on the computer, but quickly opted for a little cat nap instead.

My neighbor over at Cotton House messaged me to come over because her plans had changed. She was just staying in, and Lisa was coming over for dinner. I had already eaten the gourmet meal of my kids’ leftover spaghetti and was finally feeling lazy myself. But I got up and went over for a drink because there have been so many times when I have been home wishing someone would just message me to come have a drink! So back to the CH I went, because A) Rebecca was leaving tomorrow B) I cannot resist the CH. I’ll take a Gin & Tonic (or two) please! 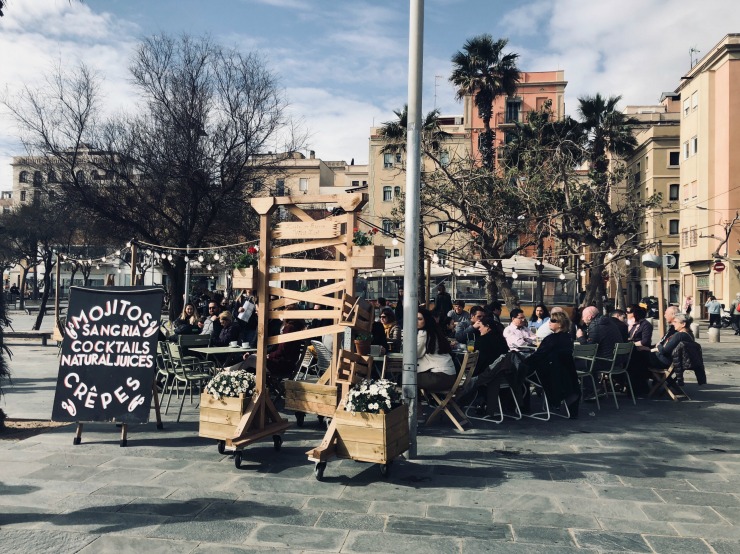 This is my absolute favorite. Sunday’s down at the beach. I went for a 8 mile run, I planned on 5 but the weather was AMAZING. (Are you getting the theme that Barcelona has amazing weather?)

I love it down at the beach especially on Sundays because there are so many people out enjoying it!! These are my people. Runners are getting their runs in, kids are rollerblading, moms and dads are pushing strollers, older couples are walking hand in hand, young kids are hanging out, the skate park is packed, paddleboarders are in the water (with wetsuits) families are on bikes… and my favorite, the old guys are playing cards and drinking beer by 10:00am!! #LifeGoals 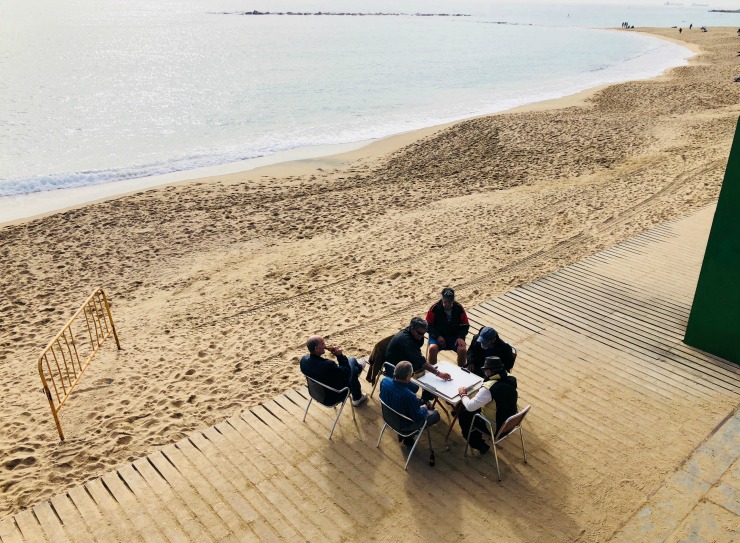 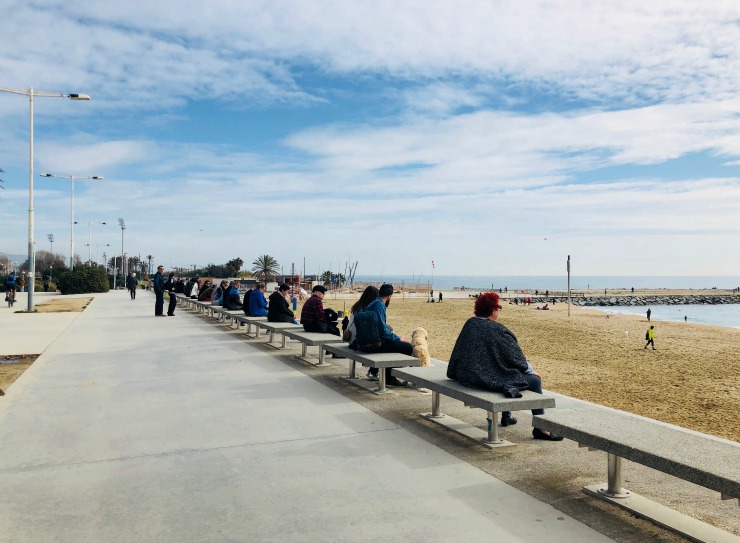 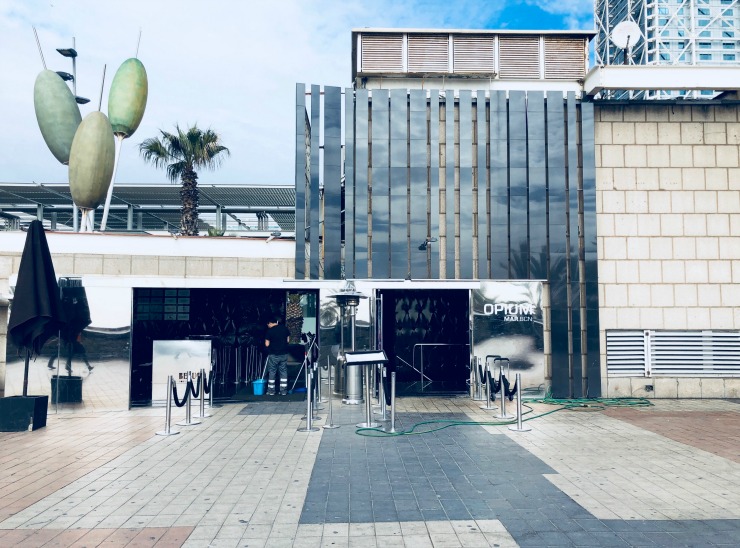 Funny thing about this picture – Opium is a club in Barcelona and I laugh when I run down here on Sunday mornings because there is always some guy hosing down the place from last nights/ early morning shenanigans!! One night I’m going to go see what is happening inside;) 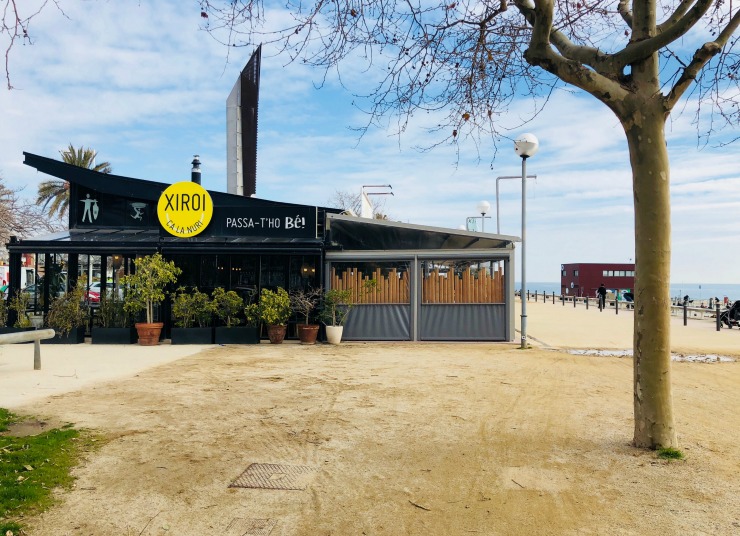 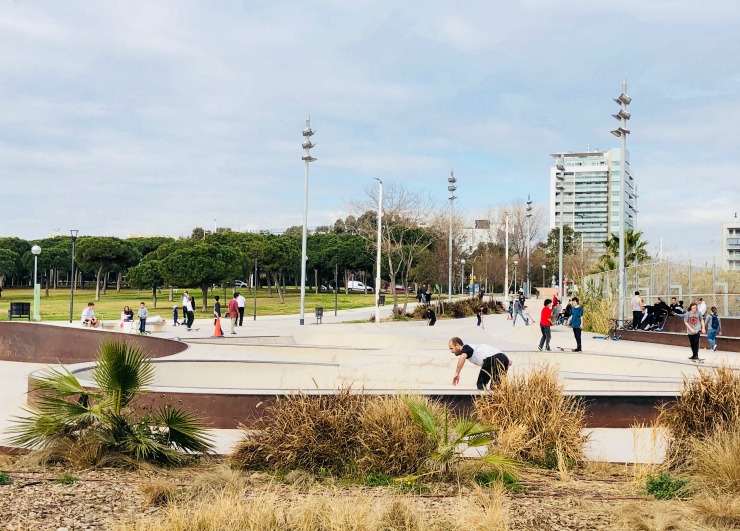 When I got home I made all the kids pancakes and took a shower. Harris and I went to grab a bite to eat at Citizen Cafe, a great little place down the street from us for brunch. Then I went home and binged on some stupid Netflix show trying not to think about Monday. Unfortunately, Mondays are still Mondays in Barcelona too. 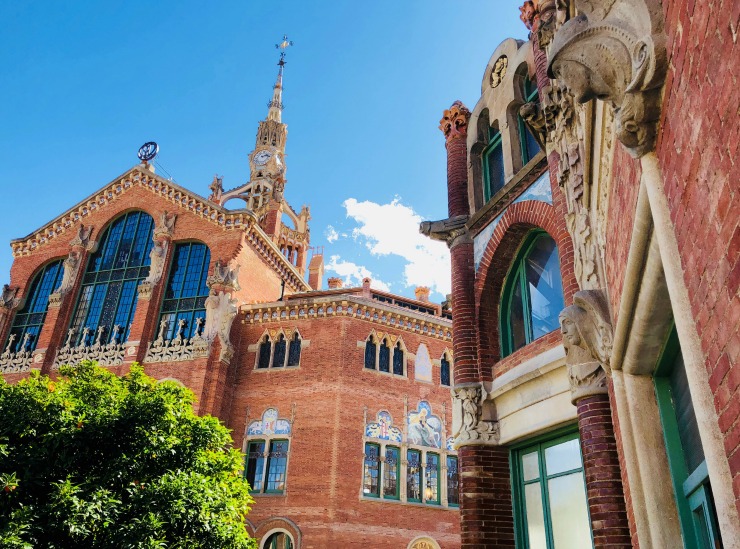