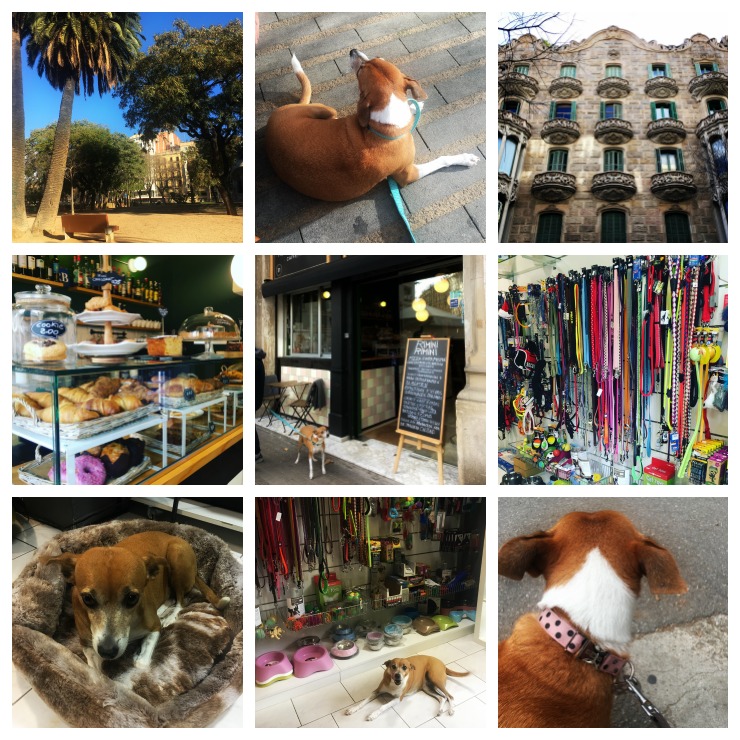 Life in Barcelona: Canela in the City!

Life in Barcelona (with a dog)

I have been meaning to write a little update about Canela’s transition to life in Barcelona… and of course I will eventually write more about the exciting journey of getting our dog from Costa Rica to Spain (that’s a long story) but for now just take comfort in the fact that she is living it up and doing just fine!

We started by taking Canela just up and down our street, Gran Via – which is a pretty major street but has a nice wide pedestrian section that runs down the center and there are bushes that run the length of this pedestrian path too. These bushes are now her personal bathroom and let’s just say, she’s helping beautify the city by fertilizing the bushes! In the beginning she would only walk about three blocks and then stop and turn around and want to go back, but eventually we got her to walk all the way to the kids bus stop (8 blocks away).

On our morning walk to the bus stop we go past Placa de Tetuan, which is a small park in the center of a large round-about and then we head down Passeig San Joan, one of my favorite streets in the city. She got used to this walk pretty quickly and liked stopping at the park on our way back.

Then on one particular Saturday morning Harris and I took Canela for a walk and a cappuccino. We wanted to see what she thought about sitting outside at a cafe and how she would behave!?

So we headed down the usual bus stop route and sat and grabbed coffee at one of my favorite cafes on Passeig San Joan, La Foga. It took Canela awhile to actually sit and relax, but eventually she sat and seemed pretty happy chillin’ with us in the sun. Once we left La Foga we wandered down the street in search of a pet store, we needed dog bowls and I wanted to buy Canela a better leash and collar that actually fit her. 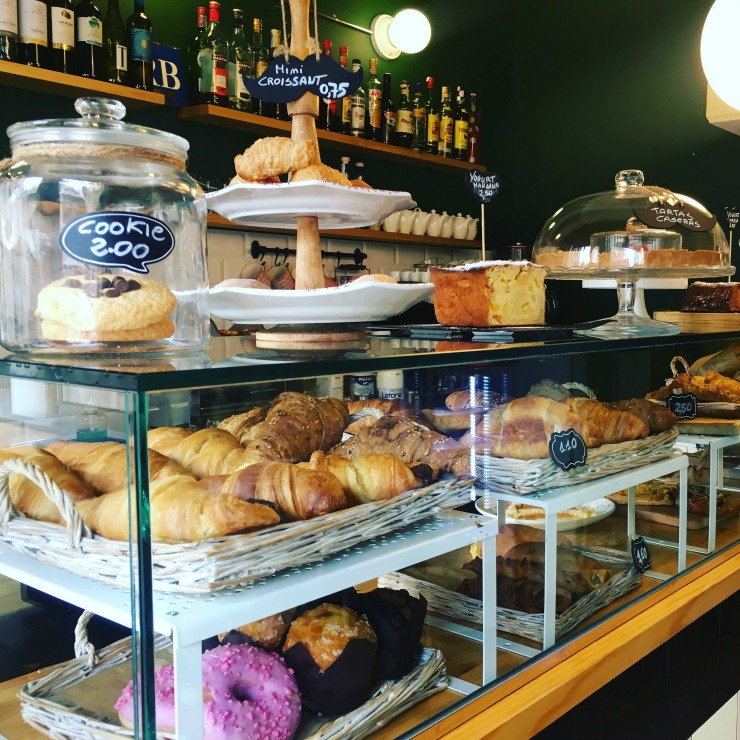 Stop at the Bakery

The one pet store that was showing up on my map was no longer there, so we continued on in the direction of home making a stop at the bakery Rimini Rimini to pick up some baked goods to take home for the kids. This is a cute little cafe for pastries, coffee, small sandwiches and even pizza. 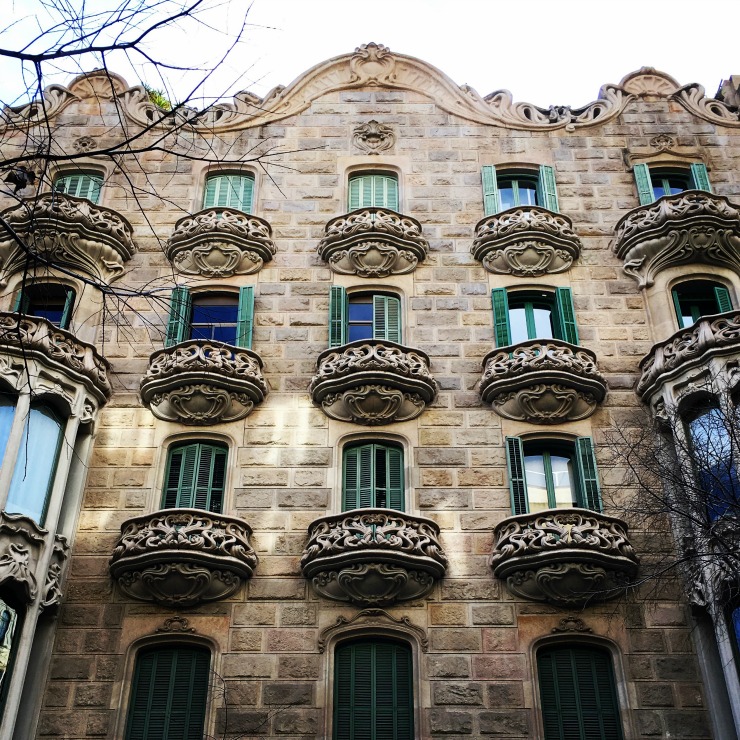 With the donuts and strudels in hand we continued and passed one of my favorite buildings, (I have about 52 of them) the architecture in Barcelona is ridiculous. Seriously, I see a new building I like every day or I see the same ones and my mouth still continues to drop when I happen upon them again and again. I was curious to know more about this building so I did a little google search…

La Casa Antonia Burés is a residential modernist building located at Ausiàs Marc, 42-46 Barcelona. It was built between 1903 and 1906 by the architect Juli Batllevell and the contractor of works Enric Pi i Cabañas.  The house was made on behalf of Antonia Burés i Borràs and her husband, the textile industrialist, Llogarri Torrens i Serra. It is the most elaborate and successful work of Batllevell performed in Barcelona. (thank you wikipedia)

*And apparently Mr. Torrens says that the design of the facade of this building was actually a gift from Antoni Gaudi who collaborated with Juli Batllevell. 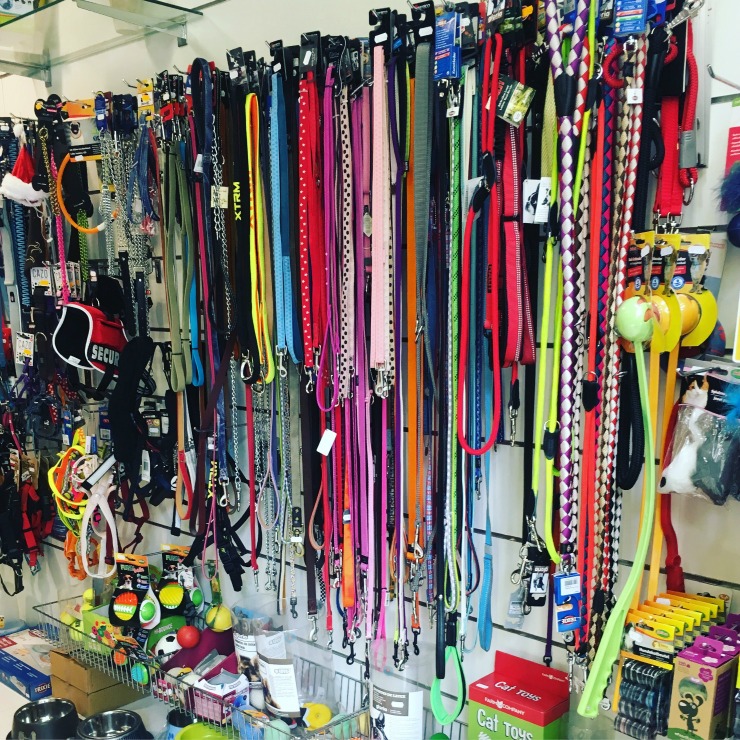 After passing an architectural work of art, we turned up a street and then walked right into a pet store, it’s as if Perruqueria Canina just magically appeared! This little pet store is also a pet groomer, perruqueria is the word for hairdresser. We bought Canela two dog bowls, poop bags, a new leash, a pretty new polka-dot collar and a cute little dog bed. I know in some countries heated dog beds are a must in winter, but here the lowest the temperatures get is about 15 degrees Celcius. Instead, I was worried about Canela getting too hot, so the bed was just a flat memory foam mattress with no fluff or fur or anything that might make her hot.

Barcelona is a very pet-friendly city and we see a lot of dogs here, and they are all so well behaved! Canela is sweet but a bit anti-social and not the friendliest. When dogs come up to sniff her the hair on her neck stands up and she growls, so we try to just keep our distance. She’s had a hard life before us, so it’s understandable. Not to mention, she just went from the back roads of Costa Rica to the bustling city of Barcelona. She’s adjusting well and um, just had the best Saturday ever!