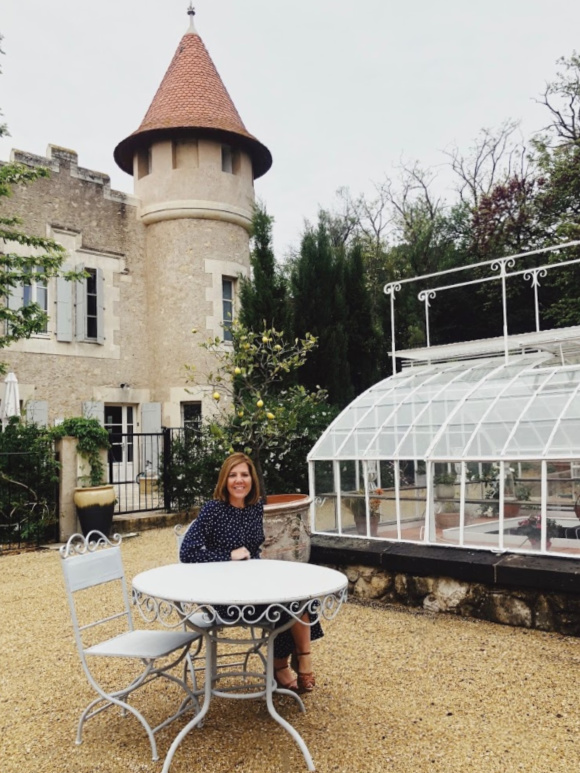 Originally we had no plans for our kids’ Spring Break, but in typical Fellman fashion, we decided to do something at the last minute. When I thought about how I wanted to spend my Easter weekend, visions of the French countryside popped into my head (as they often do) and I quickly remembered that Château Serjac has a sister property, Château Les Carrasses.

Both of these chateaus are in the Languedoc region of France and just about a 3-hour drive from Barcelona, so we quickly booked a two-night stay so we could experience another family-friendly Château in the South of France.

On our drive from Barcelona to Château Les Carrasses, we stopped in the most beautiful coastal town of Collioure, France. The sea of pastel-colored buildings was quite fitting for our Easter weekend getaway! The drive from Collioure to Château Les Carrasses is only an hour and a half, so making a plan to stop in Collioure was brilliant, and could also make an easy day trip while staying at the château!

Similar to Château Serjac, Château Les Carrasses was renovated with 30 one to three bedroom, self-catering family-friendly holiday rentals. Most have large terraces and 10 of the units have their own private pools. The large infinity pool overlooking the vineyard is beautiful and the other facilities onsite include a winery, brasserie, a large floodlit clay tennis court, beach volleyball pitch, barbecue area, petanque courts and bikes are also available.

The Château was built in 1886 by the well-known Bordelais architect Louis Garros on the foundations of a rest stop on the pilgrimage route of Saint-Jacques de Compostelle. The winery,
traditionally the Château’s centerpiece and abandoned some 20 years ago, has been reinstated to its former glory under the helm of winemaker Laurent Bonfils and his team.

Château Les Carrasses is less than 20 minutes away from the popular towns of Narbonne and Béziers, while Montpellier can be reached in under an hour. While just a short drive to the coast, there are unspoiled beaches, medieval castles, picturesque fishing villages, and antique markets. I had also found a popular hiking area near the Gouffre de l’Oeil Doux, but due to the rain, we did not get a chance to check it out. During the holidays there is a Kids Camp focused on engaging the kids outside with a variety of creative and sports activities. The concierge on site can organize a group barge trip or shared babysitters with other families as well.

Biking through the Countryside

Easter morning we set off on a little morning bike ride and went to the small town of Capestang where a small market was happening and we also made a stop at the Capestang cemetery, which I found fascinating!
I loved getting on the bikes at the Château because two years ago my son had just learned to ride a bike at Châteu Serjac, something I will never forget.

The Capestang cemetery was beautiful, and I have to say I was a bit obsessed! I have seen above ground cemeteries before, but I have never really walked around one and most of them have just been the simple tombs above ground, but these Mausoleums (small little houses) were new to me. Normally a cemetery might not evoke such delight for someone, but I really enjoyed seeing families buried together and the fresh flowers on so many graves. My son, on the other hand, found my enthusiasm a bit creepy and weird.

This weekend wasn’t about rushing around and doing a lot of things, it was about relaxing and spending time together. We were able to make lunch and enjoy the back patio, play cards by the pool, read and just hang out together. As the kids keep getting older we do much less of that since they are off with their friends most weekends, so it was nice to have some simple family downtime.

Living abroad and traveling as much as our family does, we don’t have a whole lot of traditions, we tend to like discovering new places because there is so much of the world to see! I grew up spending weekends and holidays up at our family cabin, and while I don’t have that exact tradition to give our kids, I do like having a familiar and comfortable place like these Chateaus to go and recreate similar memories with them. It may not be fishing on a boat in northern Minnesota, but it’s biking through the French countryside, and both are equally as special.

Disclosure: I was given a media rate for our stay, but of course all my thoughts and opinions are my own.