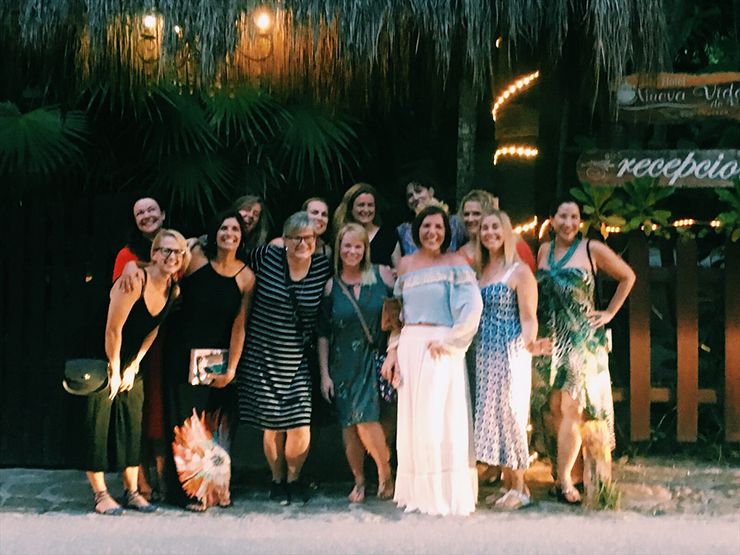 Life at Forty: celebrate, get a puppy and start a new business

Life? It’s been a whirlwind! I turned 40, got a puppy, and started a new business.

Oh, and we may have accidentally started a children’s theatre program in Barcelona too. Someone may want to come over here and check my sanity.

This is why I cannot keep up with this blog. As much as I would love to chronicle all of our latest travels and expat shenanigans, I do require sleep, therefore the blogging usually has to take a backseat. So here is a little digest to what has been happening in my ‘Life at Forty’, for anyone still listening.

Yup. To celebrate I went to Tulum, Mexico for a girls getaway and let’s just say – it was a WILD weekend. To be honest, I had dreams of going to Morocco and staying in one of those fabulous riads, wandering the markets and riding a camel. However, getting a few of my girlfriends to come all the way to Morocco was going to be difficult. Most have jobs, kids, and busy lives themselves. So Morocco was out, and while going back to my favorite place in Costa Rica crossed my mind –  I really wanted to go somewhere I had never been before.

Then it hit me. TULUM. This trendy, bohemian chic beach spot in Mexico had caught my eye a few times. Plus, I know so many people that have been there and raved about it, I knew it would fit the bill. Tulum, Mexico it was. A little far from Barcelona, but what the hell, why not!

I invited ladies from all different stages of my life. High school, college, California, Costa Rica and even Barcelona. I wanted to spend my 40th Birthday with some of the women that got me to 40. Some of the women knew each other, but many of these women had never met before, ever. I was rolling the dice that they would all magically get along and love each other. It was either that, or this was going to be a frickin’ disaster.

But honestly, I knew even though some of them are wildly different, they would somehow connect because I truly enjoy each of them. I’m happy to report that they ALL got along SO well. It brought so much joy to me to see these women all laughing and talking like they had been friends all their lives. The weekend was beyond successful. I turned 40 being crowned “La Chica Reina” and it was everything I could have asked for and more.

We stayed at La Zebra Hotel and I cannot recommend this hotel enough!! 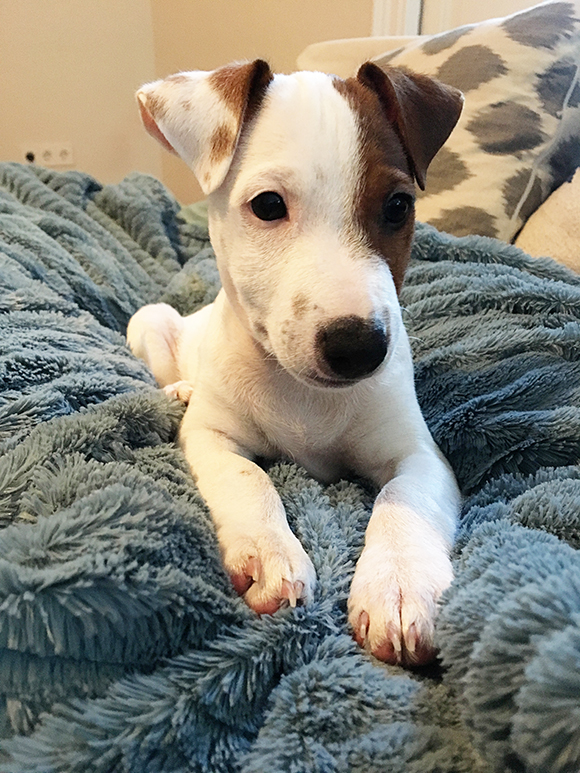 WE GOT A PUPPY

Meet Rex. The newest member of the Fellman family. We still have Canela, don’t worry. But, what’s with adopting one of the craziest dogs in world, when we travel like we do!?

Well, to catch you up a little bit, we used to have a Jack Russell named Jack. Unfortunately, he was hit by a motorcycle in Costa Rica. It was devastating and awful, our hearts are still a little broken. Therefore, we told the kids that maybe in Barcelona we’ll get another small dog.

Then fate stepped in and Hudson’s friend from school tells him that his two Jack Russells just had four puppies. The friend doesn’t just tell him, he shows him a photo and video of the puppies online, which Hudson then showed me. Really…? What are the chances of Hudson’s friend’s dog having four little Jack Russells? Actually, probably not that uncommon, we see a ton of Jack Russells here in Barcelona. It seems to be a very popular breed. So being the suckers we are and having a huge soft spot for Jack Russells, we went to go see them. We were sold. Obviously. Hudson had already picked out one of the boys, how could we say no. We had to wait about six weeks before we could get him, but he is now ours. He is literally laying on my lap as I type this. He is destroying things and causing all sorts of chaos but he is the CUTEST.

And yes, Harris and I have even called him Jack a few times. 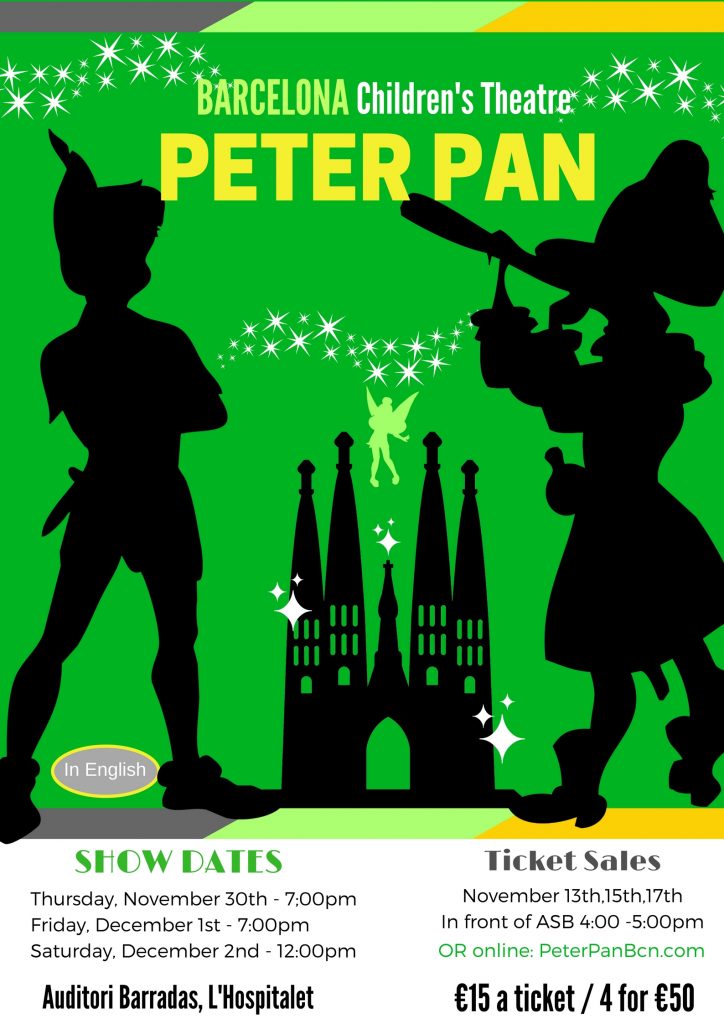 The whirlwind continues! If getting the puppy wasn’t bad enough, we added producing a children’s theatre production of Peter Pan to the mix. Well, to be clear – this was all Harris’s doing, but I immediately got swept into the craziness of it all. This has a little bit of a back story as well, but long story short: Harris and the Director we worked with in Costa Rica had tossed around the crazy idea of him coming to Barcelona to put on a show (sure, ha a ha). Then one thing lead to another, and the next thing I know the director, Paul and his girlfriend are looking for an apartment to rent for three months!

“All we wanted to do was find a English speaking theatre program to put our kids in!” However, after Harris searched and called other Spanish-speaking theatres there was nothing! There are a few theatre programs for kids in Barcelona, in Spanish and Catalan OR programs with the purpose of learning English. Therefore, as the saying goes – if you want something done, do it yourself.

Fast forward ten weeks, a whole lot of blood, sweat and tears. Wrangling 35 kids, organizing parent volunteers, finding a theatre, buying supplies, dealing with logistical challenges, and plenty of other small headaches  – we have SOLD OUT all three shows. It is unbelievable. The response and support we have received from the ASB parents, staff and community is insane! The American School of Barcelona has been our partner in this, while this is not an official school program, they too see the need for a program like this so they have been supportive 110%.

It all happens November 30th, December 1, and December 2nd.

My mom is even coming to see the show. Well, she was coming to Barcelona to visit us anyways, so we just made sure her dates lined up so she could be here to see the grandkids in Peter Pan. Mckenna is playing one of Captain Hook’s main pirates, Starkey and Hudson is playing John, Wendy’s brother.

Oh and I made that poster up there, because somehow I am in charge of marketing and graphic design. 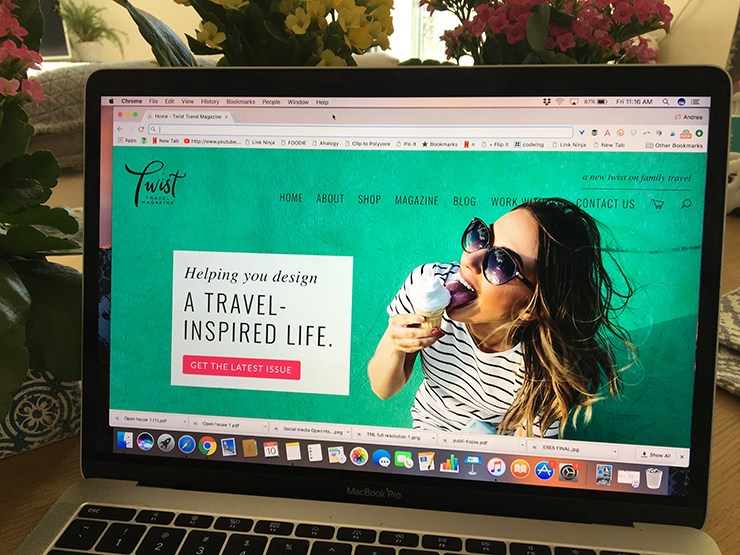 You may have seen me write about this new ambitious adventure before, when we launched the spring, summer and fall issues. However, we did not start building the website until the middle of the summer. Now you can purchase single printed copies of Twist Travel Magazine or sign up for a yearly subscription! We are still only producing them quarterly, so your subscription includes four quarterly issues.

And if building the website wasn’t enough – while we were doing that, we were also putting together the 88 page winter issue!!  The winter issue is SPECTACULAR and will be released on November 28th. You can pre-order that issue right now. I will be writing more about this and the winter issue in the next week or so. 🙂

Perhaps this is my version of a mid life crisis…? Do IT ALL – you’re getting OLD.

I don’t know whether I need a drink or a nap.