In Memory of Dawn the Dog Lady in Costa Rica

Yesterday as I sat curled up on the couch watching a movie with Hudson and petting Canela, I was scrolling through Facebook. I got the news that Dawn Scott, aka Dawn the dog lady, in Costa Rica had passed away. Dawn was a petite British woman, and a real spitfire. We had the pleasure of knowing Dawn because she rescued both our dogs Jack and Canela, among thousands of other dogs in Costa Rica. I meant to write about Dawn and share the following story years ago, so I guess this is as good of time as any, in her memory.

When we moved to Costa Rica, she just so happened to have two dogs that she had recently rescued, took care of and was now looking to place them in a good home. Jack was a little black and white Jack Russell with loads of energy. She found Jack with a broken leg, got him to the vet and nursed his leg back to health. Even though he kept his left paw up and bent a lot of the time, that did not slow Jack down at all.

Canela was stand offish and more timid. She was afraid of people but so sweet once you got to know her. Dawn had found Canela in a hole on the side of the road and took her in. She believed that Canela had been abused. Dawn told us that she really wanted the two of them to stay together because Jack was her happy therapy, and was great support to Canela. They had formed a bond, and so she really wanted to find someone to take them both. 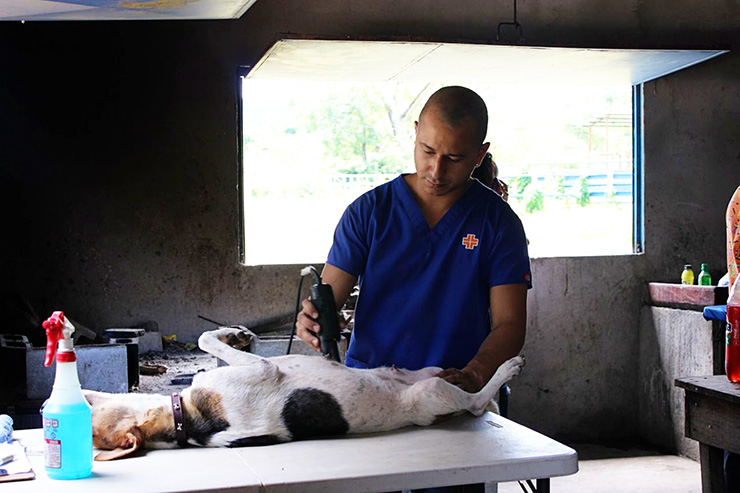 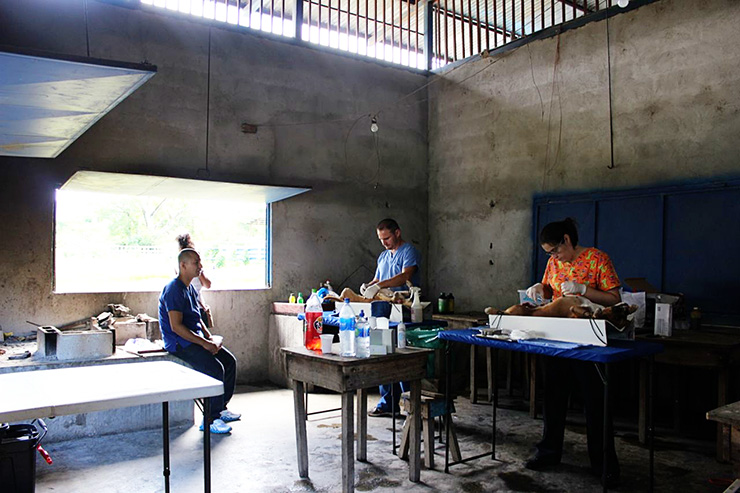 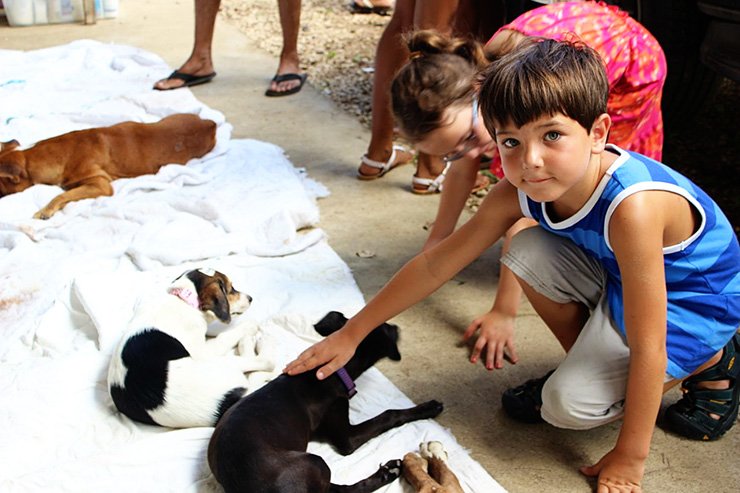 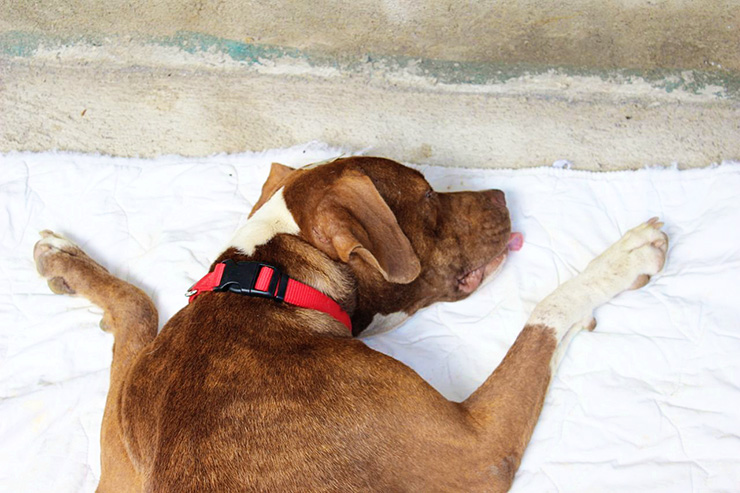 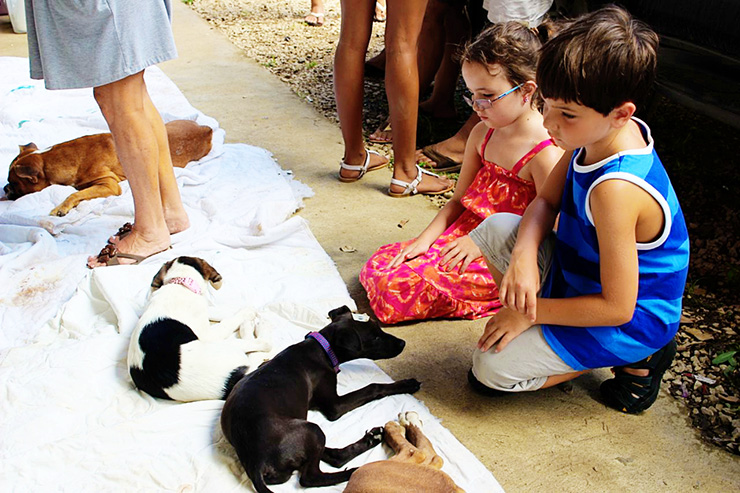 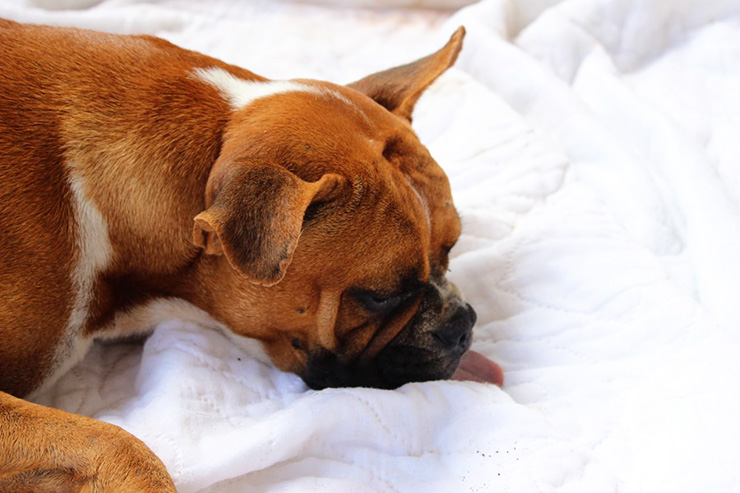 Helping the Dogs of Costa Rica

Dawn would hold dog clinics in the surrounding areas to spay and neuter pets to help control the pet population. Many Costa Ricans cannot afford to take their dogs to the vet or have this procedure done. She would hand out flyers and tell all the locals when the clinics would be in their area. Dawn would even have her groundskeeper and housekeeper pick up dogs and puppies and bring them to the clinic if people lived too far away.

She found veterinarians to volunteer their time, and would pay for many of the supplies out of her own pocket. These supplies included Puppy Vitamins and other healthcare necessities for dogs. Dawn did this whenever she was called upon to help rescue a dog. She made sure the dogs received the care they needed.

We went to one of these clinics with her and saw the work she was doing first hand. The kids were a bit scared at first as we walked up and saw the dogs just laying there. The dogs were fine, just heavily medicated from the surgery. The dogs rested for about an hour after the procedure before they could be taken home. Dawn then sent them home with a bag of dog food and a new collar or leash.

How We Got Two Dogs

While we lived at Dawn and Sid’s, we all got to know the dogs. We would find Canela sleeping outside our door some days. Jack and Hudson were similar in personality and energy while McKenna and Canela were a bit alike in personality too, more serious and calm. As we prepared to move into our permanent home, Dawn asked us if we wanted to take them both. We had just moved to Costa Rica with two small children, we were not looking to adopt a dog, let alone two dogs! The kids asked frequently if we could take them. Harris and I were pretty decided that we could not take them. After all, we travel too much and we did not want to add this to our plate.

Then our hearts gave way. We could not deny that perhaps these dogs were supposed to be ours. Isn’t there a saying… you don’t choose your dog, the dog chooses you. Or something like that!?

I told Dawn we would take them, but we wanted to surprise the kids. We told McKenna and Hudson that we had to ask our new landlord if it was even okay for us to have dogs. A few days after moving into our house, we secretly planned for Dawn and Sid to bring the dogs and come up for sunset and drinks to see our new place. When Dawn and Sid arrived, the dogs jumped out of their truck and our kids came running out of the house to greet them. I said “Guess what guys, they’re staying!” McKenna’s eyes got huge and she caved right into my gut and gave me the biggest hug she had ever given me. Hudson ran around to the back of the house to chase Jack. The dogs belonged to us.

During our last year in Costa Rica we unfortunately lost Jack (which I also meant to write about). It was pretty traumatic and is still very painful. We called Dawn and Sid to let them know what happened to Jack, and she wasn’t exactly surprised. He was a crazy little dog who loved chasing cars, buses, quads and motorcycles. Fearless and a bit stupid, that little guy.

Once I read about Dawn, I instantly thought about Jack, bouncing around with his gimpy little paw and greeting her. We have met so many people that have positively impacted our lives, living abroad. We are better people because of them. 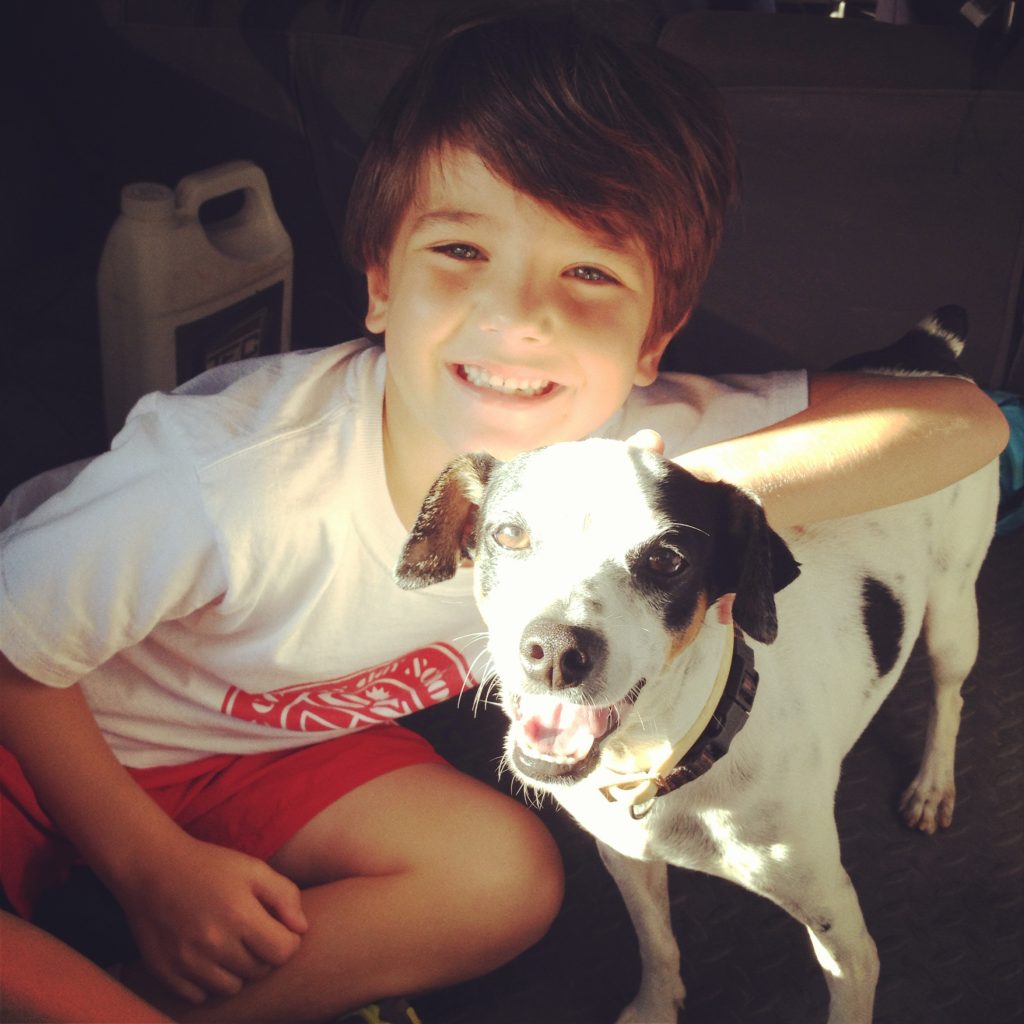