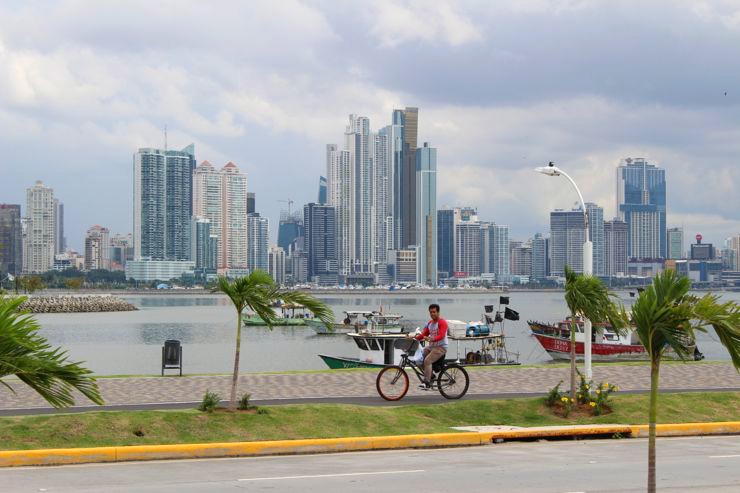 A few weeks ago we needed to make a run for the border to get our passports stamped, so we flew to Panama City for a long weekend with close friends of ours, the Clemons, another expat family living in Costa Rica. Many people visit Panama City to see the famous Panama Canal or head to Bocas del Torro, a popular beach destination on the Caribbean. However, when you live at the beach it’s nice to get away from the coconuts and sand to spend some time in a real city. You know, with paved streets, traffic lights and restaurants with four walls. 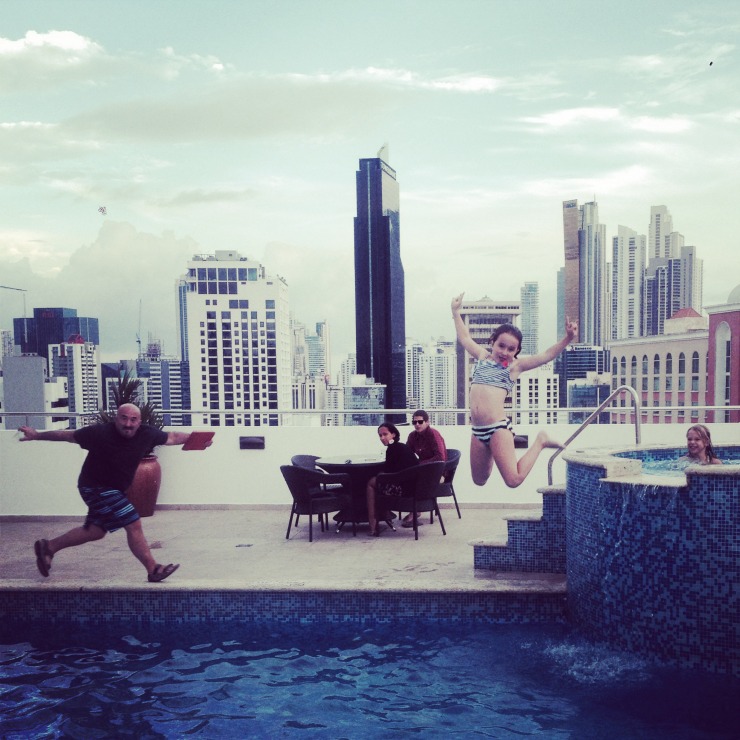 Panama City completely surprised me, first by it’s massive and pristine city skyline. We stayed at the TRYP by Wyndam Panama Centro Hotel, which has a rooftop pool and an excellent view of the city. Jumping from the jacuzzi into the pool was not allowed, (they won’t be using the above photo for marketing purposes) but his might just be my favorite picture from the entire trip. Especially with Harris running in the shot for a photobomb. The TRYP Panama Hotel has another location at the Allbrook Mall, so if you are in Panama City to do a lot of shopping (which is why many people go to Panama City) this might be another option for you and your family to stay. 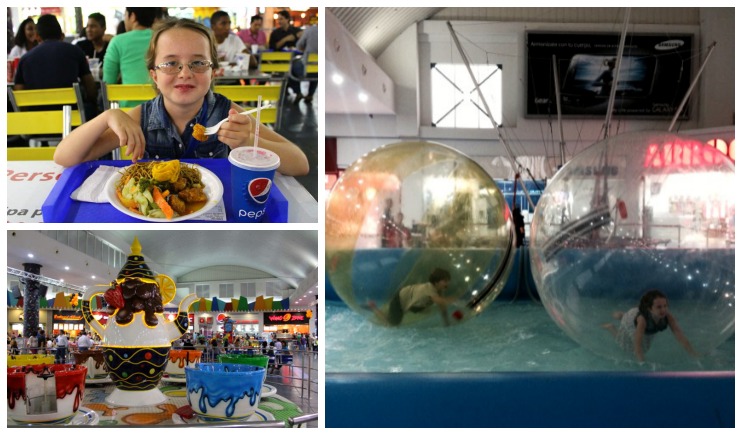 The Allbrook Mall is where we caught the Panama City Aqua Bus and then after the bus tour we spent an afternoon cruising the mall. Our kids do not go to a mall or eat at a food court very often, so this was actually something the kids were excited to do! The food court has an overwhelming number of options and even has some rides and a few unique activities for the kids. We paid to put our kids in these giant hamster-like balls that float on water, watching them try to stand up and move their ball was hysterical, and the best $4.00 we’ve ever spent. 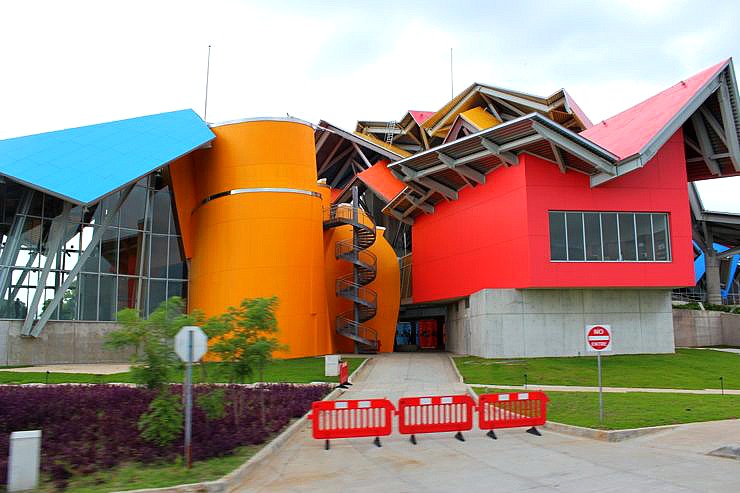 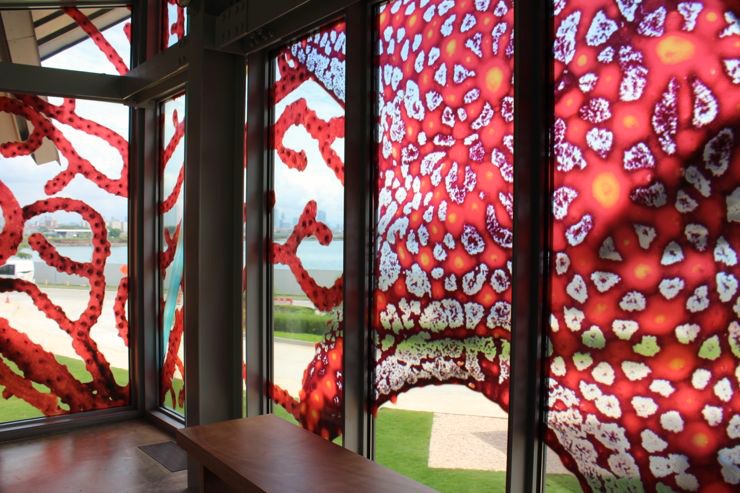 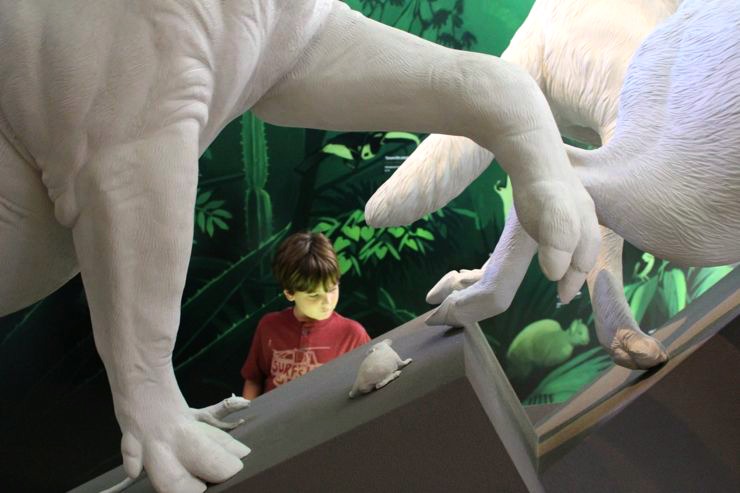 I was excited to check out the brand new Frank Gehry Bio Museo, which just opened October 2nd, 2014, it’s so new we could smell the fresh paint. This is a great museum to learn about the history of Panama and its diverse ecosystem. Included in your admission you are given a phone like device for a self-guided tour and it took us about two hours to go through the entire museum. The location of the museum is also worth the price of admission, it sits right on the peninsula and on one side you can get a great view of the entire Panama City skyline and on the other you can see the very beginning of where the boats make their way to enter the Panama Canal. This is also a popular area for running and jogging too.

The Bio Museo is located right on the Amador Causeway. Hours & Admission 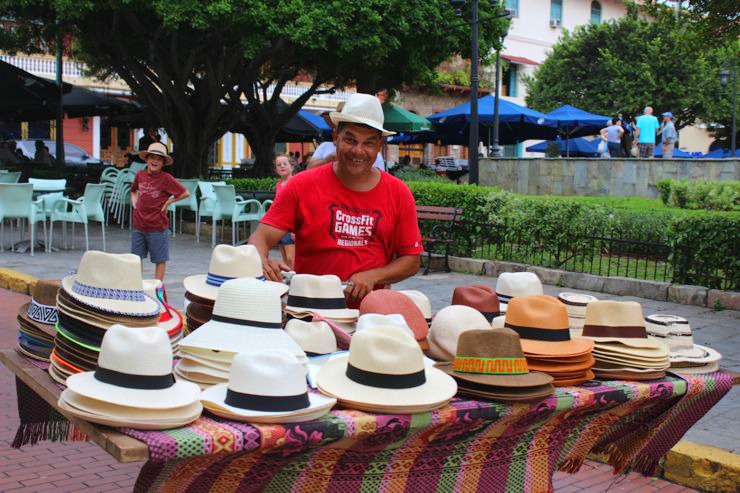 From the moment we arrived in the Casco Antiguo area I was on the hunt for a Panama hat. Lucky for us we immediately bumped into this friendly Panama hat salesman right on the street. Hudson noticed his table had wheels, which meant he was a hat salesman on the move! We also stumbled into a few other shops scattered in and around the narrow streets of Casco Antiguo where you can find even more Panama hats, beautiful hand-woven baskets and bowls among other Panama gifts and souvenirs.

Panama City Style – Did you know Panama hats are actually handmade in Equador? 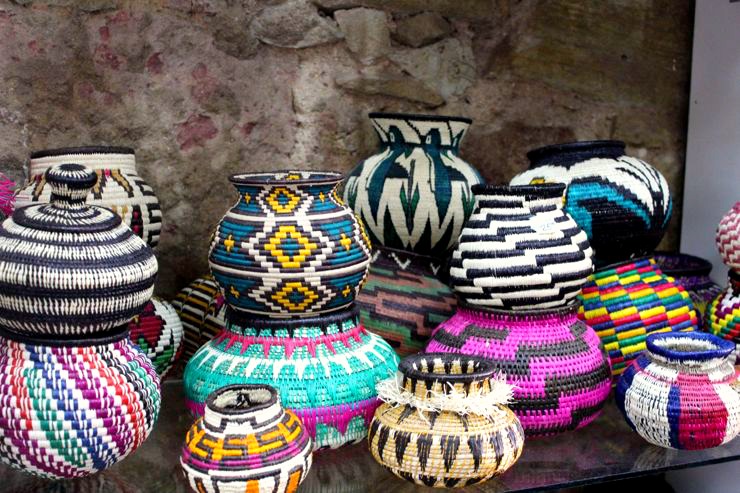 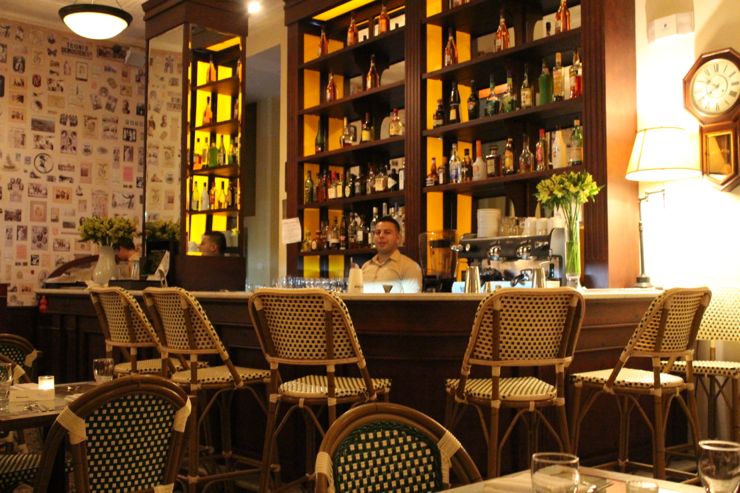 The Museo de Panama (Panama Canal Museum) is also located in Casco Viejo as well as many restaurants, bars, and hotels. We went to Las Clemintinas for dinner, not exactly uber kid friendly but we dressed them up and didn’t cause to much of a scene. If you are traveling without kids go here for a nice dinner, cocktails and listen to live music. It was a fabulous little bistro, and probably even better sans kids.  Las Clenentinas is also a small boutique hotel and right next to The Canal House.

I wanted to check out Mojitos sin Mojitos but we treated our kids to Granclement gourmet ice cream and sorbet instead. The sacrifices you make when traveling with kids. 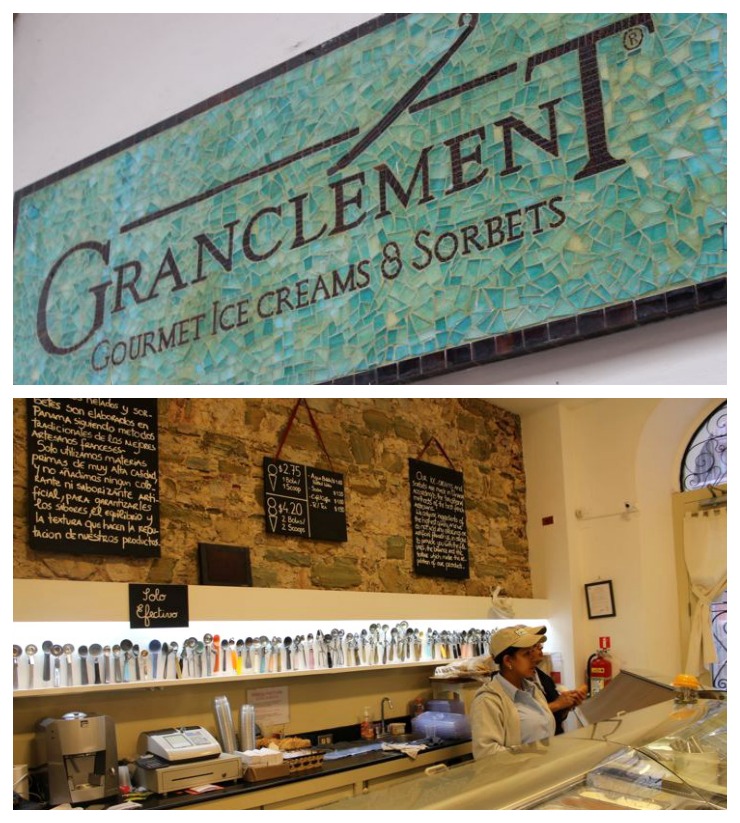 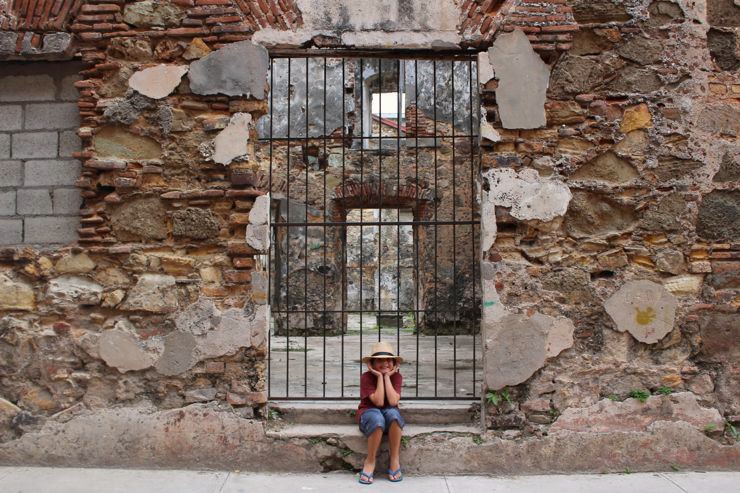 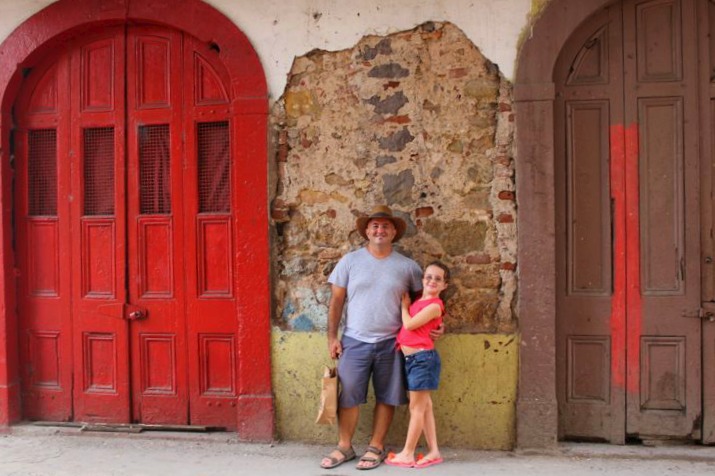 We spent a lot of time in Casco Viejo, for a few selfish reasons. I absolutely love walking around old historic districts taking pictures and I had to check out The American Trade Hotel, sure my kids are not always thrilled with the things Mom wants to see and do, but I believe that traveling with kids doesn’t have to be all about the kids 24/7. 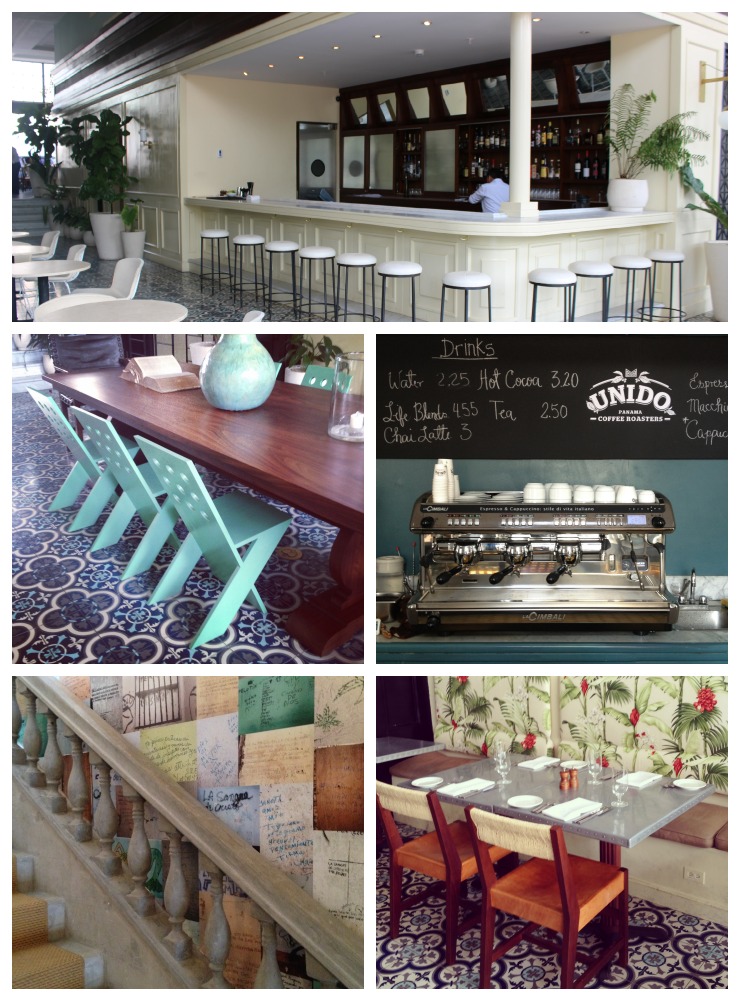 The American Trade Hotel is apart of the Ace Hotel family and is a stylish gem in the heart of Casco Viejo. This was definitely something only I wanted to see, but my family and friends traveling with me came along for the ride. We made a reservation for Sunday brunch and I was so glad we did. Brunch was lovely and the food was excellent definitely worth the visit!  Cafe Unido is also located inside the hotel, so you can just pop in for a cup of coffee or espresso and a pastry too. Unido is the local Panamanian coffee, it’s fantastic and I even bought a bag to take home.

The American Trade hotel brings a fresh modern style to this historic area, with touches of cultural flare. I loved the blue floor tiles throughout the property, which are actually tiles from Nicaragua. When the manager gave me a tour she told me that the tiles on the walls leading up from a staircase were photographs of graffiti on the walls of the building before it was renovated. 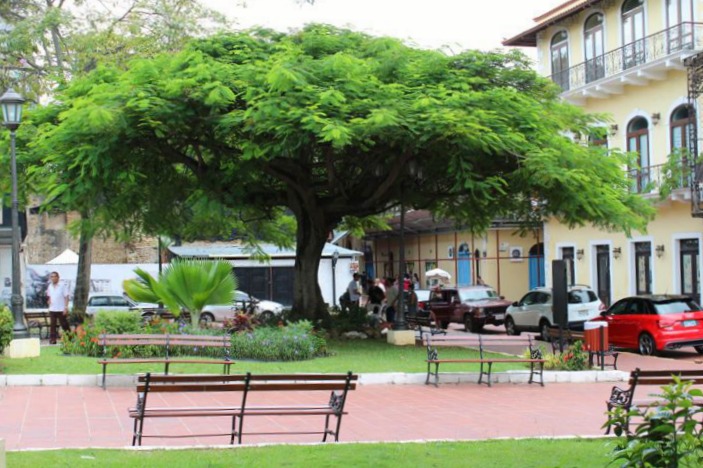 Plaza Herrera is a beautiful square just outside The American Trade Hotel and a perfect place to people watch. My husband actually distracted all the kids in this park while I spent time taking a tour of the hotel.  There is a statue of General Tomas Herrara but I actually found this tree to be even more beautiful.

From Plaza Herrera and the American Trade Hotel you can easily walk over to the Cinta Costera, the 189 million dollar project that was completed in 2009 that connects the new city with the old. The walk will give you a great view of the city and this is where you will find Avienda Balboa. 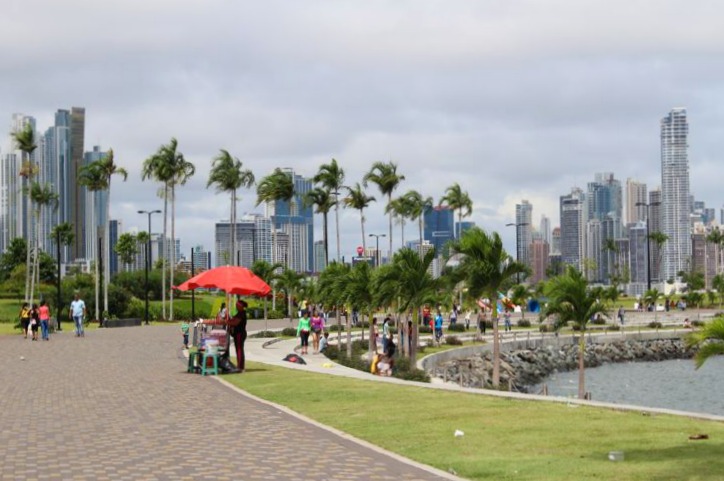 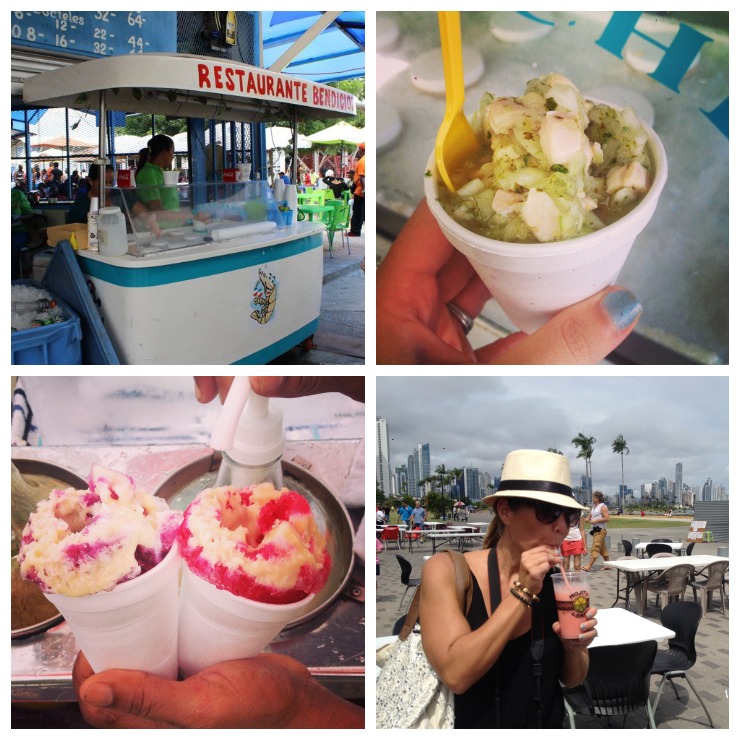 If you do one thing in Panama City (besides the Canal), stroll down Balboa Avienda. This is a recently build park and walkway that sits right on the bay and has great views of the city skyline and Casco Viejo from across the way. It is a popular spot for jogging, walking and has some food and beverage vendors. There is a park for kids and you can rent bikes. However, we never did find the place to rent the bikes, but we saw plenty of them.

This is also where the popular Mercado de Pescado is located and you MUST buy a $1.25 cup of Ceviche. It’s fresh, delicious and cheap. They also sell all different flavors of Mojitos and the kids got shaved ice with condensed milk for only $.75 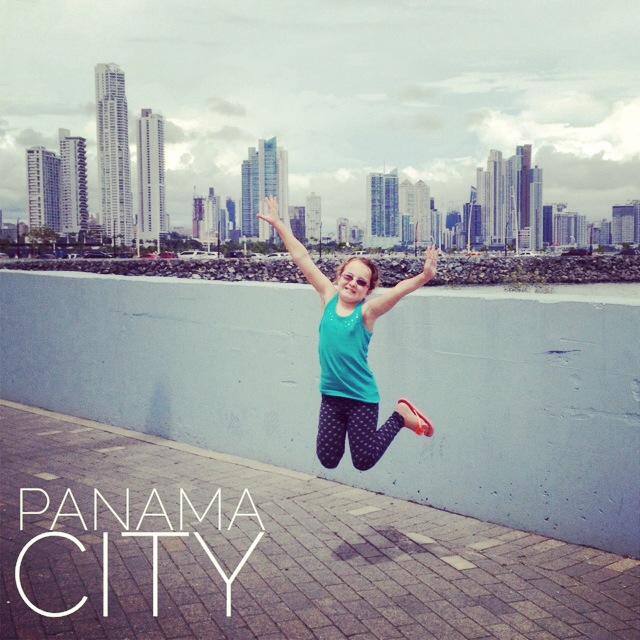 Panama City might not be on most people’s bucket list or a top family vacation hot spot, but if you find yourself in Panama City there is more to do than you might think!  It’s a city that is growing fast and is the hub of business in Central America. With the development of trendy areas like Casco Viejo and the new Bio Museum, you’ll appreciate what this modern city has to offer

We did not do the Panama Canal tour because we wanted to spend more of our time exploring the city than a 5-hour tour with kids, maybe next time. If you happen to be living in Central America or South America, Panama City is a great place to visit and get a little city back in your life!

Have you been to Panama City?  What was your favorite things to do and see?