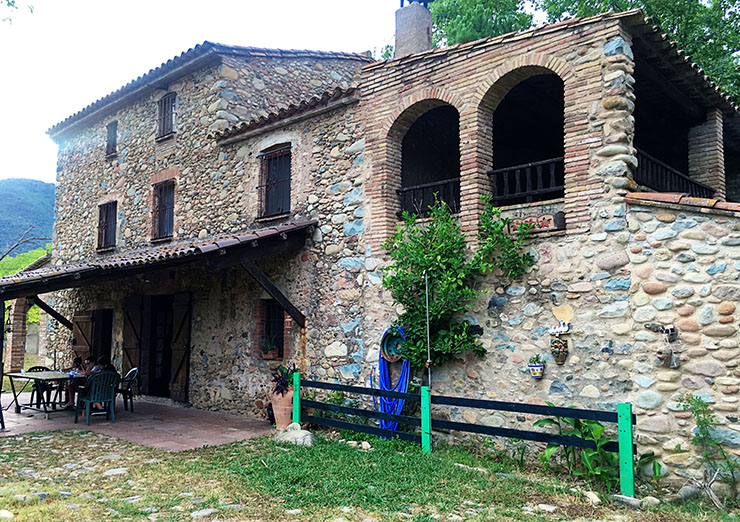 Renting a Country House in Spain 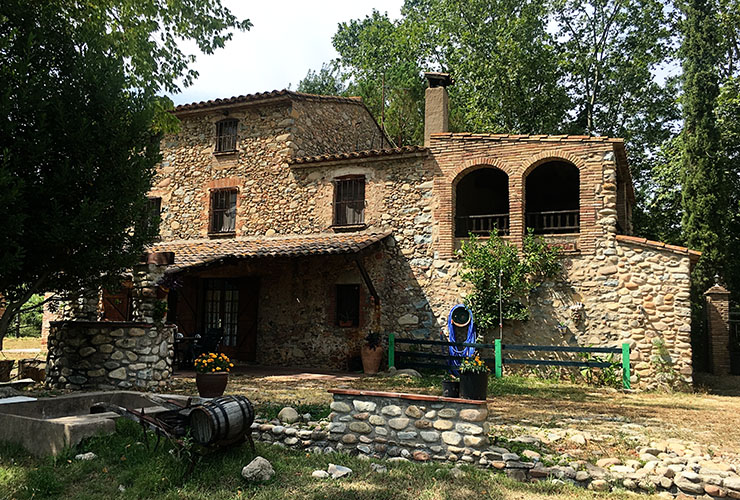 Renting a Country House in Spain

Let me just start by saying that this will be the first of many posts about renting a country house in Spain, because I plan on staying in as many as I possibly can. I am obsessed with them. I want one.

There are hundreds of these country houses for rent all over Costa Brava, the northeastern region of Spain, in Catalunya. Costa Brava is the gorgeous coastline just to the north of Barcelona that has one postcard perfect beach town after another. However, going a little further inland you’ll find the quiet rural countryside with quaint little villages that eventually lead you to the Pyrenes mountains. So clearly, an amazing part of Spain.

Renting a country house in Costa Brava was not on the major to-do-list when we first moved to Barcelona, but some friends of ours were in Barcelona for a few weeks and they actually gave us the idea. They wanted to get out of the city and see a little bit of the countryside, so they booked a room at Pasteral Hotel Rural, a charming little hotel that seemed to be in the middle of nowhere – but we were up for the adventure! They had actually booked the last room, so while searching for a place to stay near our friends we happened upon this old country house for rent, we booked it and away we went!

Getting from Barcelona to Costa Brava

This particular country house we rented was in the town of Pasteral which is about 30 minutes outside of Girona. It is an area more well known as La Cellar de Ter, a very rural area known for miles of biking trails. These biking trails are called Vias Verdes (which means “green-ways”) and are old railways that have been covered and have been turned into beautiful biking paths throughout the countryside. This area is also popular for fishing because of the Ter River. The river actually sits right behind this house and we went for a few walks by the river and each time we spotted men fly fishing.

One of the most popular destinations in Costa Brava is the city of Girona and it is very easy to get here from Barcelona by train, it only takes about an hour. You can either rent a car in Barcelona and drive yourself to your country house or you can take the train and rent a car right at the Girona train station. Car rentals are cheaper in Girona then in Barcelona, so to save some money you may want to go this route. We needed a car to get out to the country house, to explore the area and to get to the stores to do some food shopping, but if you are staying in Girona you may not need a car.

*There are other trains that hit the coastal towns of Costa Brava, however I have not taken them yet. 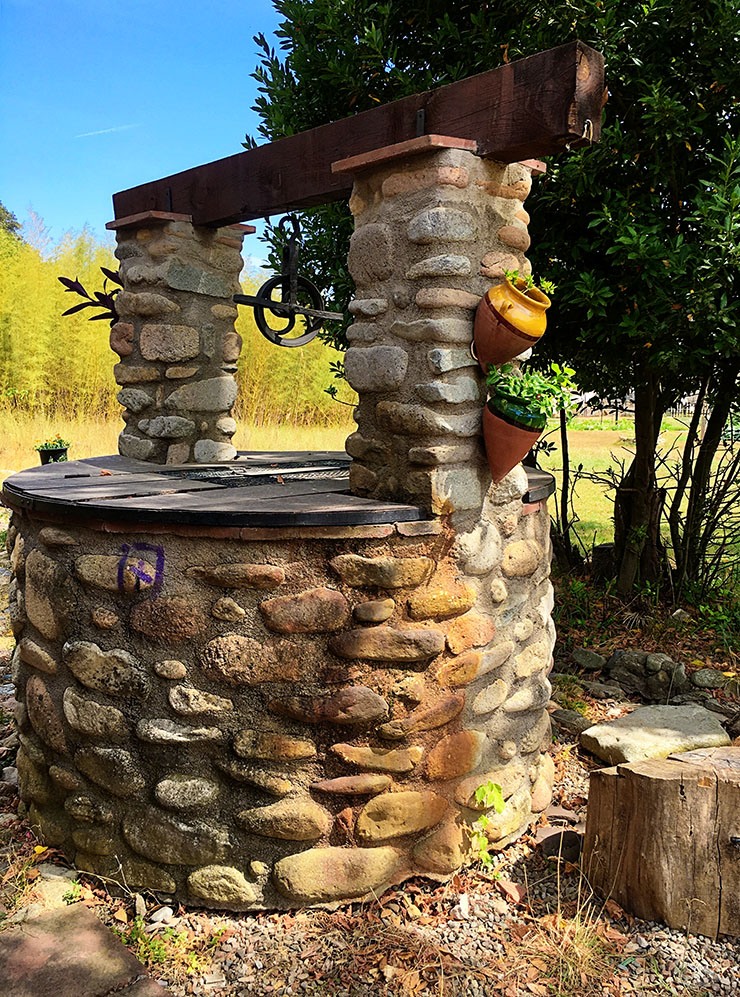 When we arrived to the Can More Country House, the owner and his daughter (who spoke english) were there to greet us and show us the property. The owner only spoke Spanish, and while we understand a lot of Spanish, it was nice that he had his daughter there to help translate anything we did not quite understand or if we had any specific questions. As he showed us around he kept looking at us for some sort of sign or nod of approval, I think he genuinely wanted us to be very happy with the house, I could sense the pride he had for it. He was so sweet and kind. 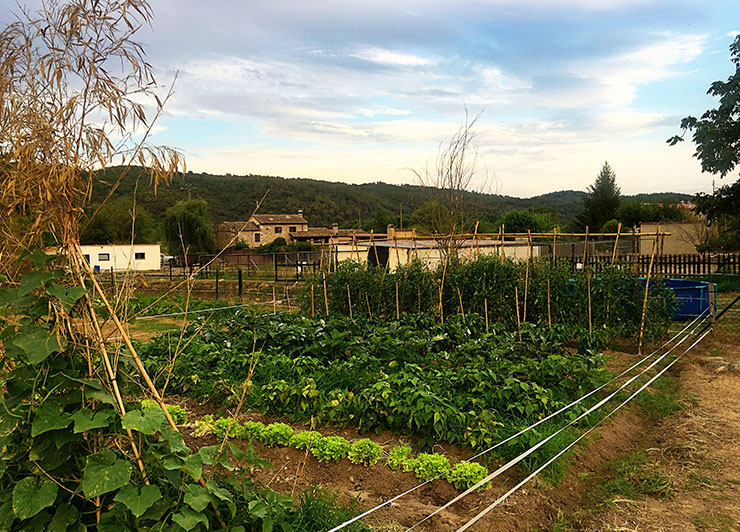 The Can More Pasteral Country House was built in 1496 and used to be an old barley mill. The owner made sure to reference that this was about the same time as Christopher Columbus had discovered the Americas. Which was an important time since he was introducing many of these European crops of wheat, rice, barely, and oats to the new Americas.  I just wished I spoke better Spanish to have been able to ask him even more questions about the history of this house.

There is a small farm on the property with chickens, goats and a few large white ostrich like animals, called rhea’s. The kids naturally wandered over to the animals right away and the owner went and got some bread to let the kids feed the goats. Later that afternoon the owner brought us over a dozen farm fresh eggs, I’m assuming they were probably just hatched from his chickens that morning! 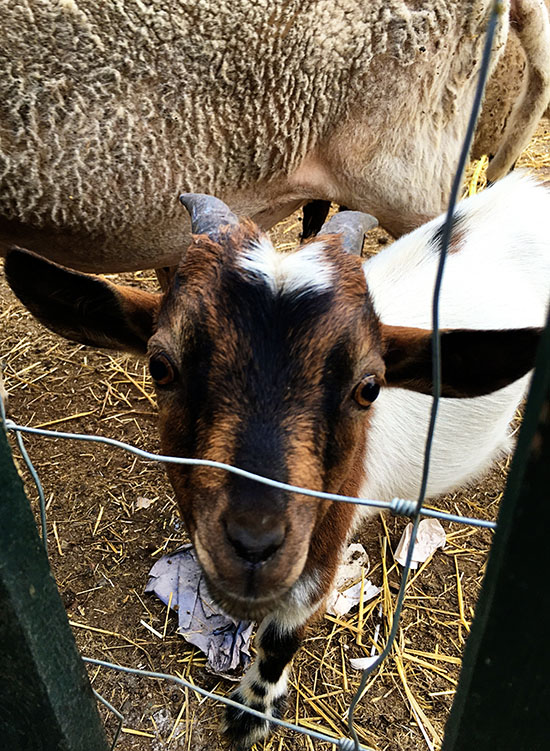 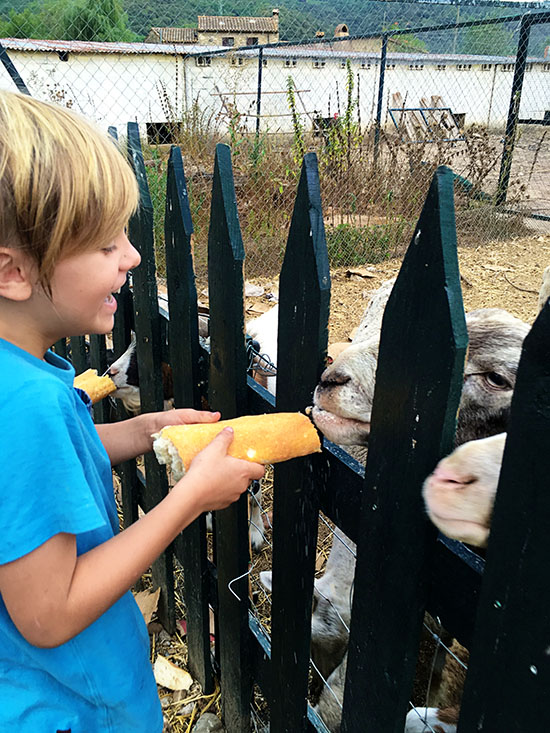 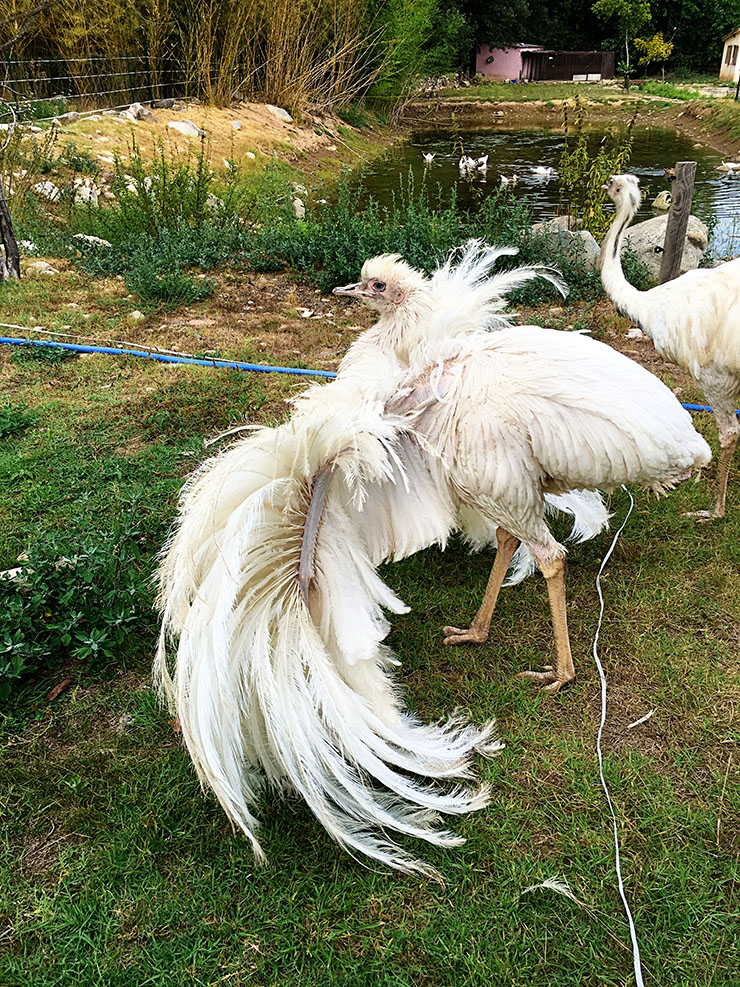 This is a rhea, a flightless bird related to the ostrich and emu. There were several of these walking around and while they don’t look all that friendly, he stood near one of them and told the kids that is was safe to pet them. But i still kept my distance. The wings on these things were gigantic! 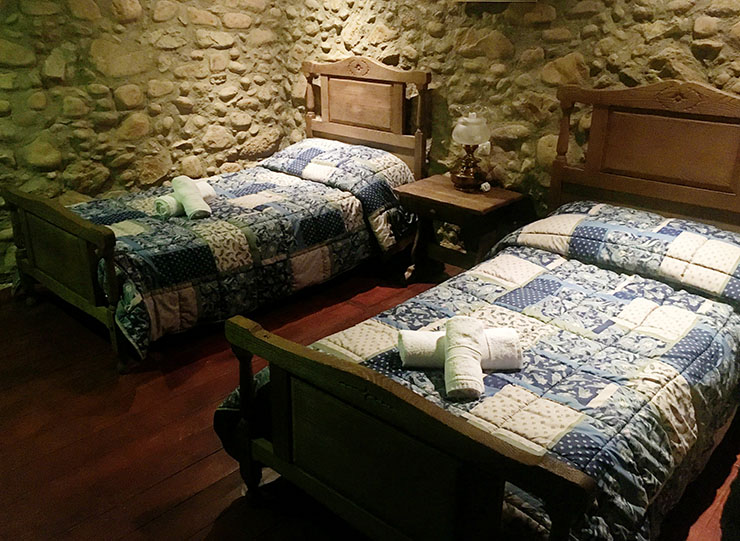 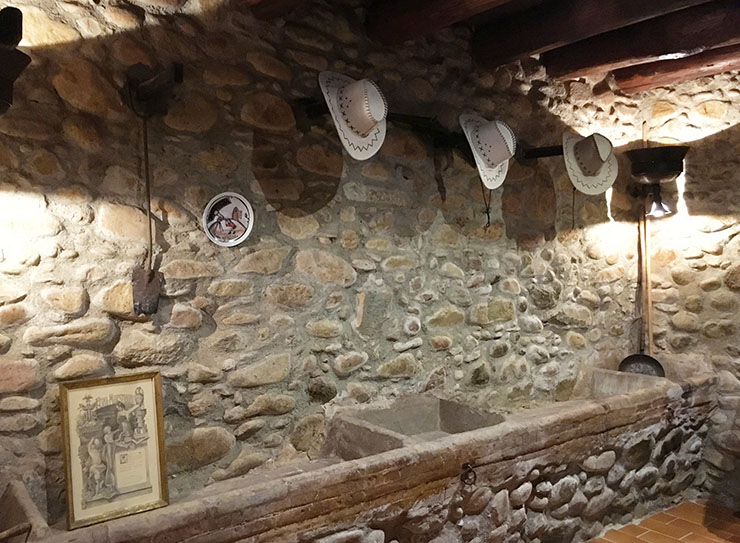 I assumed that this was a place where maybe there was water and the men tied up their horses and hung up their hats! But I really have no idea and that is probably not what they did. This was inside the house, so clearly not a place horses came, but perhaps it used to be outside…? It obviously has something to do with the barley being processed here, but I am still wondering what this was used for.

If you know what this is or what it was used for – please share in the comments below! 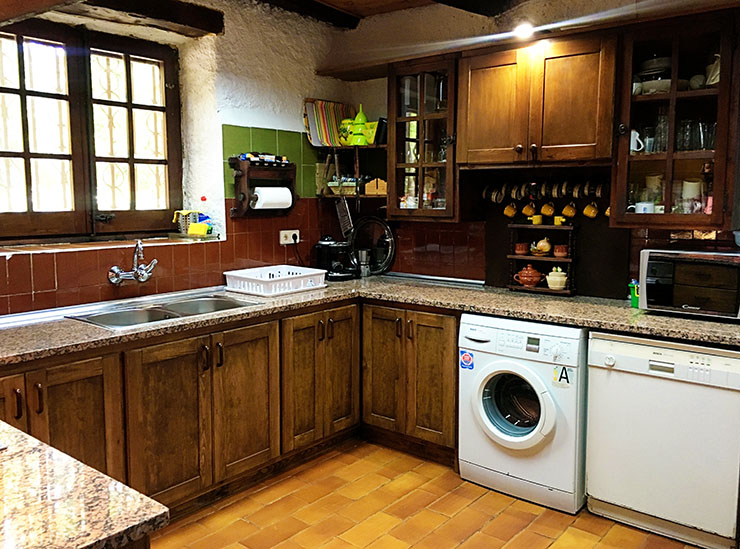 The kitchen had everything we needed and  I loved digging through all the old plates and bowls, there was such an eclectic mix of floral patterns and colors. I love old ceramic dishes, coffee mugs, silverware and glass bowls. There is just something about these things that make me very happy, they’re like little vintage treasures. I wonder how long some of these things have been with the house!? 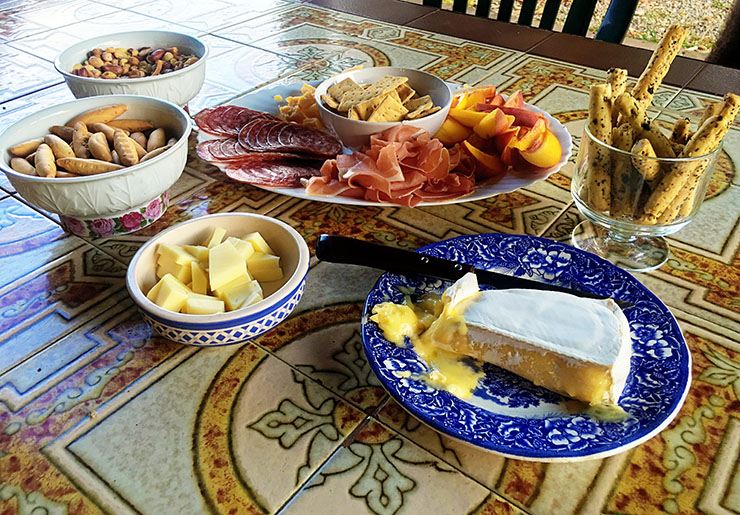 There is a BBQ grill and we made dinner with our friends both nights. We also just enjoyed sitting around having delicious snacks, enjoying wine and watching the kids run around and play. On the last nigh they even put on an entire show for us. 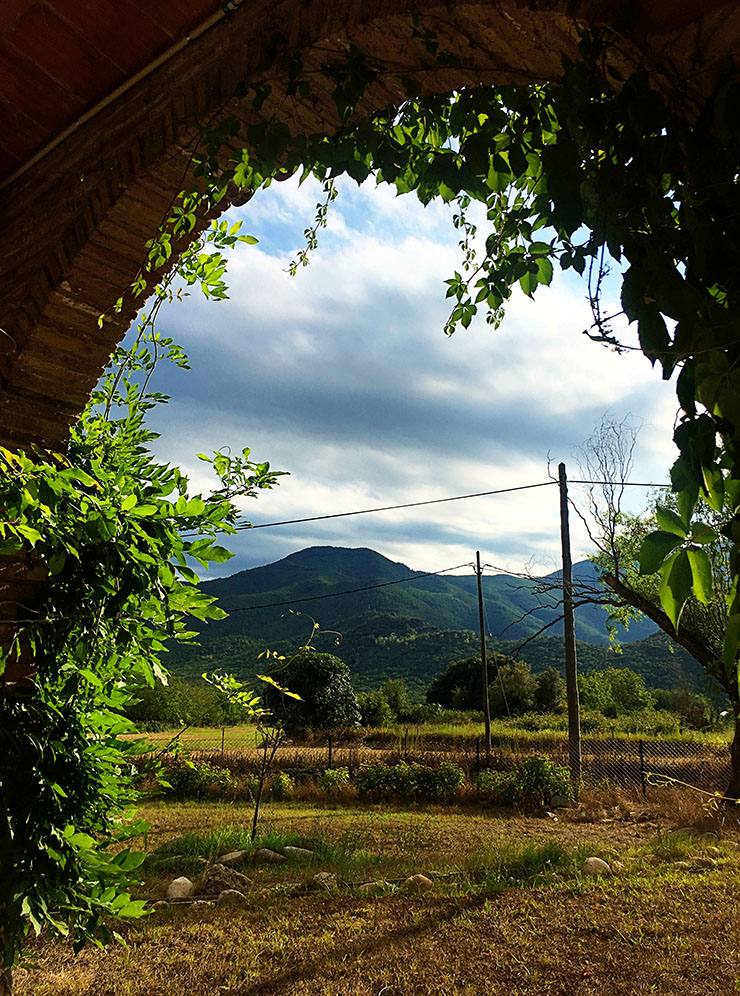 This was the view from the the side patio where I enjoyed a glass of wine as the day just started to get that warm dusk glow. Perfection. 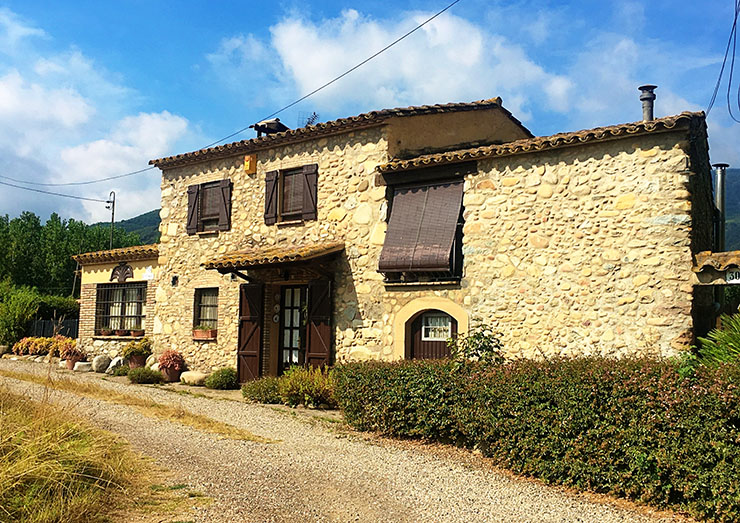 Walking around the neighborhood we saw a few other country houses too! (However, I am not sure these are is for rent) 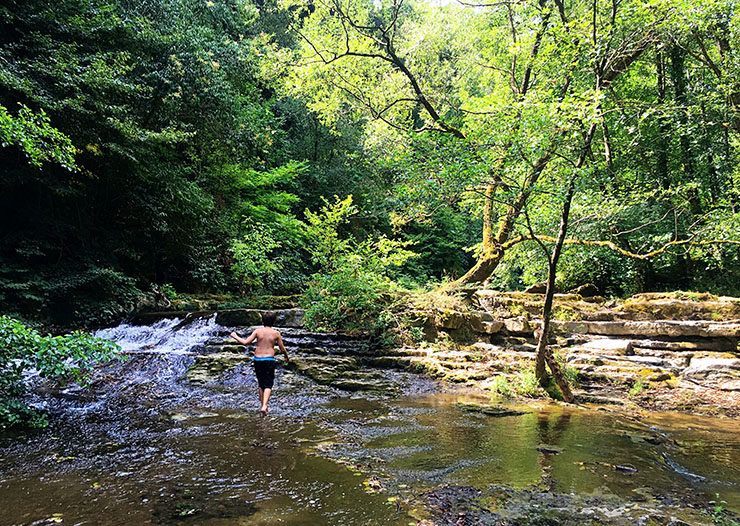 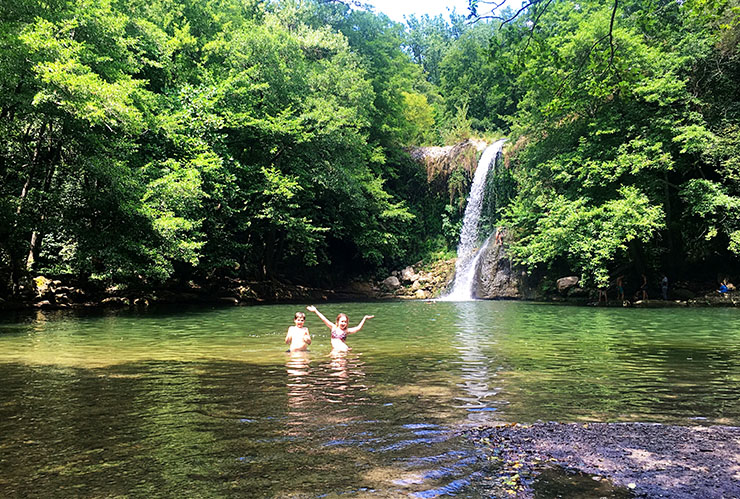 A waterfall in Costa Brava, Spain??  This isn’t Costa Rica!

The only reason we discovered this waterfall is because the friends we were with (who we met while living in Costa Rica) saw some people in swimsuits, carrying a bunch of bright floatation devices down a random dirt path – so they assumed there must have been a place on the river for swimming. So being the curious types, the next morning we put on our swimsuits and went to see what those people were walking to, and sure enough it lead us to a waterfall.

The only way I could describe how to get there was take the main road up the mountain and when you see a huge manufacturing like building, park and go behind it and follow the path. (I know – crazy!) It was not marked at all, so clearly this is a “only the locals know” type of spot. A lesson in keeping your eyes open and be sure to observe what the locals are doing or where they’re going!

(I have tried to research this waterfall on the internets, but I kept coming up short, sorry!)

I had posted on Facebook joking that we bought this country house and people took me very seriously, because clearly it is totally something we would do.

So I shot this video explaining that we did NOT buy it and gave a small tour. Enjoy!

Since staying at our first country house, I have been planning my escapes to stay in more of them!

There are larger country houses to rent if you are traveling as a group, some have been renovated and more modernly updated, some are more luxurious and have pools!  I’ll gladly stay in some of those fancy ones too, but at some point they are no longer a quaint little country house but large estates or Spanish villas. Nothing wrong with that – but with all those modern updates I can’t help to think that it might take away some of the charm, simplicity and authenticity of a true country house stay. But hey, I’m willing to do the research to find out!

I am looking forward to staying in a variety of country houses, but I know that this first one will always have a special place in my heart!

You can find some country houses for rent on most booking sites like HomeAway, VRBO, Bookings, and even AirBnB. Just search Costa Brava or Girona. There is also Catalunya Casas / Charming Villas  / Holiday Houses Costa Brava.