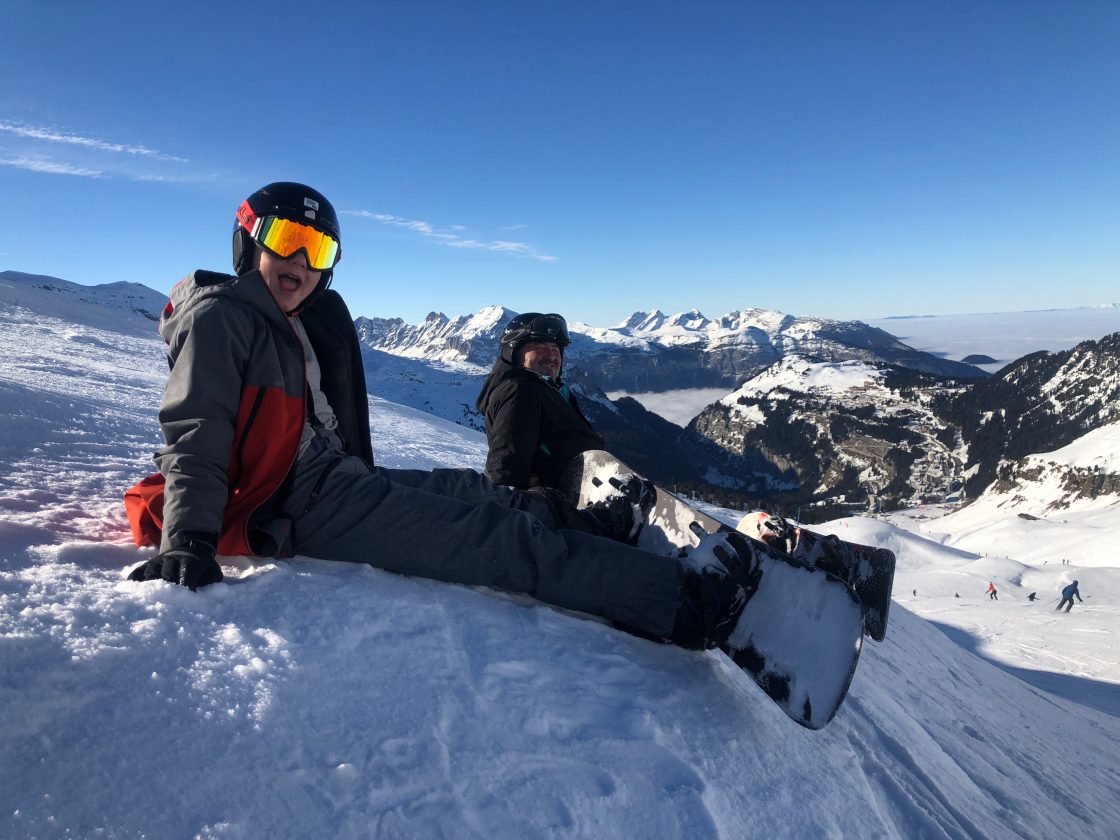 Skiing the French Alps with Kids

We just got back from a wonderful ski vacation in the French Alps! We have gone to the French Alps every year since we have moved to Barcelona, the first time we went to Chamonix, last year we went to Avoriaz and now we discovered the little ski town of Samoëns, which is about 30 minutes from the popular (and much bigger) town of Morzine. I might not call myself an expert just yet, but I do have some solid intel to give you!  As a North American, skiing in the French Alps took some getting used to. Like many things in Europe, things are just different at French ski resorts and you have to learn to be patient and embrace it. I can now honestly now say that I love the French Alps, which is funny because it also took me three visits to love Paris. Apparently, France and I needed to really get to know one another before we committed to a solid relationship.

Getting to the French Alps

The closest and most convenient airport is Geneva, from there you can either take a shuttle or rent a car and drive to a variety of destinations in the French Alps. Alternatively, you could look at Hotels in Geneva too, being that the majority of the popular ski resorts are just over an hours travel away from Geneva. From Barcelona, we have flown to Geneva twice, which is about an hour and fifteen-minute flight and costs about 99 Euros. And then last year we actually drove to Avoriaz with our dogs, which was quite the adventure. It is about a 9-hour drive but we stopped and stayed one night in Valence, France. There are many pet-friendly hotels in the Alps, so if you want to take your fur babies it can be done! In this post I am going to just quickly run down the three places we have been to help guide you a bit if you are considering a ski trip to the French Alps.

Chamonix is the quintessential French ski town, it’s fancy. People told us there are better places to ski, which I now know there are, but it’s Chamonix, where downhill skiing started people! The village is fantastic and what you would expect, lots of hotels, restaurants, bakeries, and shops. This is what all those North American ski resorts have tried to emulate. This is original, it’s vintage and makes you feel a little chic. But when I say fancy, I should say that I have been to “fancier” ski resorts, sometimes things in Europe are a bit dated, as they should be, so just keep that in mind. As someone who has now lived outside the USA for 5 years, I can tell you everything in America is HUGE and a bit over the top so when coming to Europe to ski, just leave your grand attitude at home and you will have a much better time.

I should say that I do not have much experience actually skiing in Chamonix, because the year we went it was early in the season and it had no snow, I wrote all about our Christmas in Chamonix here. So I do want to go back later in the season and get a better understanding of the mountain. But the village of Chamonix is wonderful; we actually went back for a day this year so that our kids could meet up with their friends that were in Chamonix for winter break, so I know the village pretty well now. One of the places we remembered from the first time we were in Chamonix was eating at Artisanal Hot Dogs and Aux Petits Gourmands so I was excited to go to both of those again.

Travel Tip: Chamonix is only about a 30-minute drive from Morzine, and an hour from Samoëns. It’s all close, so if you want to ski more than one place you can or if you rented a car you can take day trips to check out other towns very easily.

Where we stayed: We rented a modern condo right above the main village through AirBnB, it was a fantastic location!

When we went to Avoriaz I actually thought I had booked a hotel in the neighbouring town of Morzine. It wasn’t until we were driving through Morzine and our GPS said we still had 15 miles to go up the mountain did I realize that we were actually staying in Avoriaz! This ski resort is on the mountain and when I say on the mountain, I mean there are no cars permitted in the resort at all. So, when you arrive at the parking base you are directed to pull up to the curb and unload all your luggage, then park your car in the main car park. Then your luggage and you are loaded onto horse and carriages (yes, ALL 1,000lbs of it) or, if you arrive too late, you’ll be shuttled up in a big mountain Cat machine (yup, that was us)! This little adventure takes you to the actual village where all the hotels, shops and restaurants are. All of the hotels in Avoriaz are ski-in ski out and everything is walking distance. But if you do need a ride, it’s by horse and carriage or snowmobile. This was fascinating to me! I have never been anywhere like it.

After settling in and understanding where the heck we were, and getting over the first day of feeling a little stuck, it was amazing! The best part about staying in Avoriaz is that the mountain is right outside your door, you can just strap your snowboard on and go, or walk right to the main chairlift and get to another part of the mountain away from the crowds and ski-school kids. A few of my favorite things about Avoriaz was the Igloo Bar, the fun kid’s freestyle area for my son and the indoor waterpark. The accommodation varies and ours was very nice, a bit small but it had a kitchen and the kids had a separate bunk room.

Travel Tip: You can stay down in Morzine and still ski to Avoriaz, the Super Morzine Lift connects to Avoriaz but not directly, from what I read it does take a couple more chairlifts and blue runs to get to Avoriaz. Staying in Avoriaz doesn’t mean you are totally stuck and can never leave, it just takes a bit more time and effort to get down from this part of the mountain.

We booked REALLY late for this trip, like 10 days before we left, so everything was pretty much picked over in Morzine. But we found a few options that were close enough, that we just decided to book anyways and see what we got. We stayed at a cute little hotel called Gai Soliel and it was adorable. The best part was the bus stop to get to the gondola was across the street.  From Samoëns we took the Grand Massif Gondola up to get to the main ski area but the area where we actually spent all our time snowboarding was in Flaine, which was fantastic! We loved it over there, but it just took a little time to get there from Samoëns. So, as much as I enjoyed our little town of Samoëns next time I would book earlier and stay in Flaine and I would definitely recommend families to stay in Flaine.

We went into Morzine on the afternoon of New Year’s Eve just to walk the town a bit, we grabbed some hot chocolate but didn’t stay long because it was SO packed and I had a headache and we also need to grocery shop before stores closed. From what I can tell its a fantastic ski town, and it’s bigger than I expected!  On the way back to Samoëns we stopped in a smaller town just outside of Morzine called Les Gets – which was a really nice size town. In fact, we almost stayed there as well, I liked it because it was smaller and less crowded then Morzine. So you could also stay here and very easily get to Morzine, its super close.  I still want to actually stay and ski in Morzine, I’ll get there eventually – and then I can give you the scoop!

Travel Tip: I actually really enjoyed staying in a smaller town with fewer people, obviously the bigger towns were crowded because of the holiday, but the smaller towns also have so much charm. We were also near a very big Carrefour grocery store, so we were able to buy lots of groceries and pick up a few things we had forgotten.

LEarning to Love the French Alps

I would go back to all three of these places, however, reflecting back, we probably had the best time in Avoriaz. The ski-in-ski-out thing is the biggest reason why, and it was just unique to be in a ski village in the middle of the mountain, with no cars and all the horse and carriages!

The thing that bugged me the most about staying in Chamonix and Samoëns was the TIME it takes to just get started! The lines for the first Gondola that you need to take just to get you up to where the actual snow is, then the time for the actual ride up, then the next line for the chairlift to get you out of the main base area and to a section where there are not a million people. Call me impatient, but when I am fed, fueled up by coffee and ready to go I want to go, not wait another 45 minutes just to get started. 🙂 I know first world problems.

Avoriaz, cuts all that time out, we just jumped on one lift right outside our door and we were gone, and if you were up early enough, there were hardly any lines. But that being said, staying in Samoën allowed us more freedom to explore, we went into Morzine, Chamonix and even checked out Les Gets. When you stay on the mountain and with ski-in-ski-out, you tend to just stay in that one place. So really, it’s all about preference and what you are looking to experience.