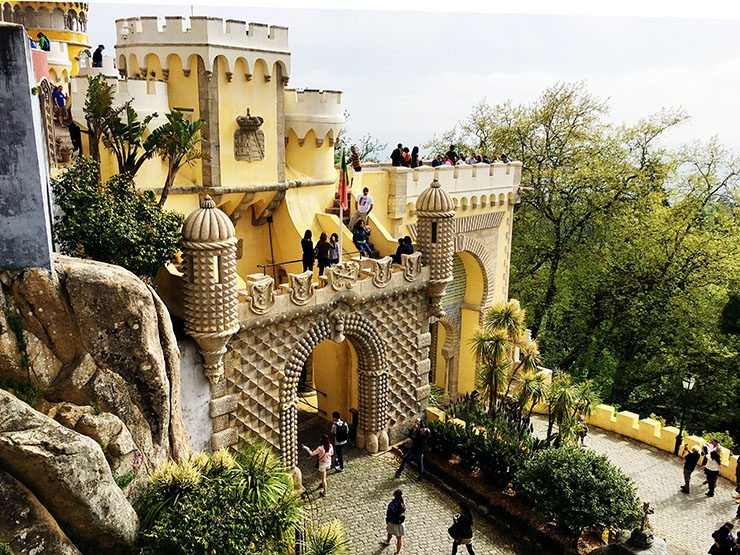 When you tell people you are going to Lisbon usually the first thing out of their mouths is, you have to go to Sintra. Sintra is a UNESCO World Heritage Site, known for the colorful Pena Palace, Castle of the Moors, Palacio Quinta da Regaleira and Monserrate Palace and Park. Not to mention the actual palace of Sintra, Vila Palace which sits right in the city center. Sintra is about 30 minutes from Lisbon which makes it an easy day trip. However, I’ve heard a few people say they wished they had more time in Sintra. We decided to stay over one night, and I am so glad we did. Visiting Sintra with kids is easy and a lot of fun. But there is a lot of walking, so be prepared.

We actually rented a car and drove to Sintra because from there we planned to continue north to the city of Porto. You can also take a train to Porto, but we thought a car would allow us to be on our own schedule. Looking back, I may have skipped the car, but more on that in the next post. 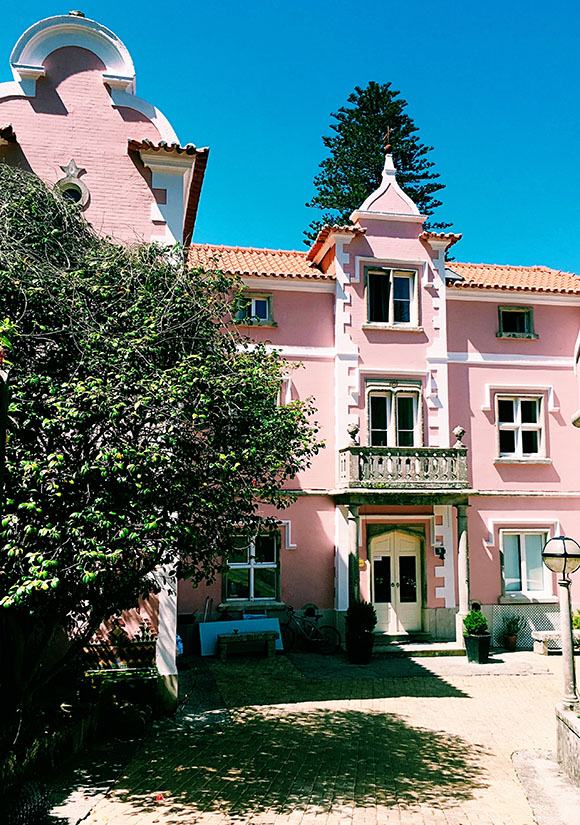 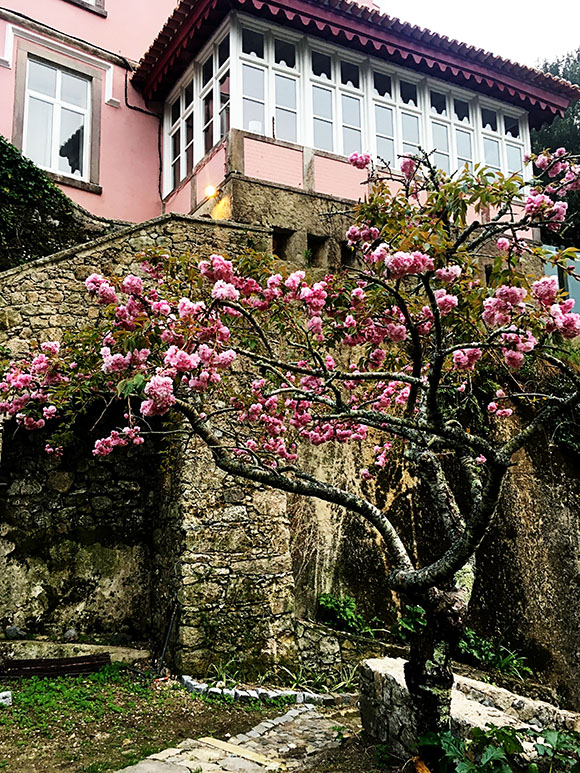 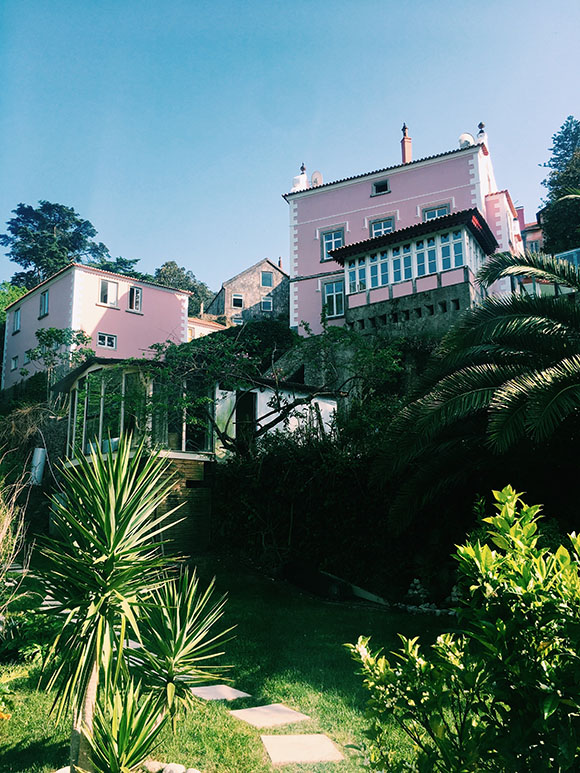 Where we stayed in Sintra

When we arrived in Sintra, our navigation lead us to this cotton candy pink little gem of a hotel. I was already thrilled (I didn’t remember booking a pink hotel!). I couldn’t wait to see inside. There weren’t a lot of hotels to choose from, as we booked at the last minute so I was happy with whatever color it was. We went in and no one was in sight, but there was a bell to ring for service on a small dresser at the entrance. We rang and a nice blond woman came bouncing down the stairs and welcomed us. She told us our room wasn’t quite ready, so we parked our car next to the gardens, walked to town, ate some lunch and returned later.

Quinta das Murtas is a small bed and breakfast in a historic Portuguese villa. The main building has traditional rooms while behind the main house is a few cabins and family suites that sit next to their small garden and pool. We booked one of the family suites and it was a large studio-type room with three beds and a full kitchen. While the accommodations are not necessarily fancy, our cabin had large windows that faced the garden. We were surrounded by such lush green scenery that it made us feel like we were in a green house. This hotel is in a great location and only a short five minute walk to the center of Sintra. 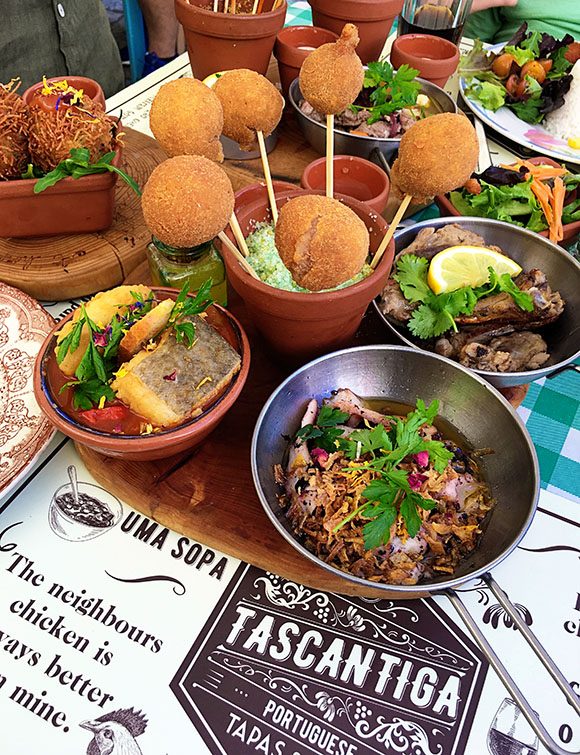 When we arrived in town, it was very busy and swimming with tourists. I saw a few large tour buses and sighed a little, as it was Easter/Semana Santa week. We were gonna have to rub a few elbows.

Sintra is a very small village with narrow streets and some fun little shops, and restaurants. We walked for a bit trying to find a place to eat but most restaurants were already packed. I jumped on my phone, did a quick search and found Tascantiga, which looked lovely online, so we headed there hoping for a table to be open. With only two families in front of us, we waited about 15 minutes and were seated outside at a lovely table in the sun. I just told my husband to order a bunch of stuff so we could sample a variety of tasty Portuguese tapas. I am not sure what everything was, but we liked almost everything. Even my son loved his octopus blade! 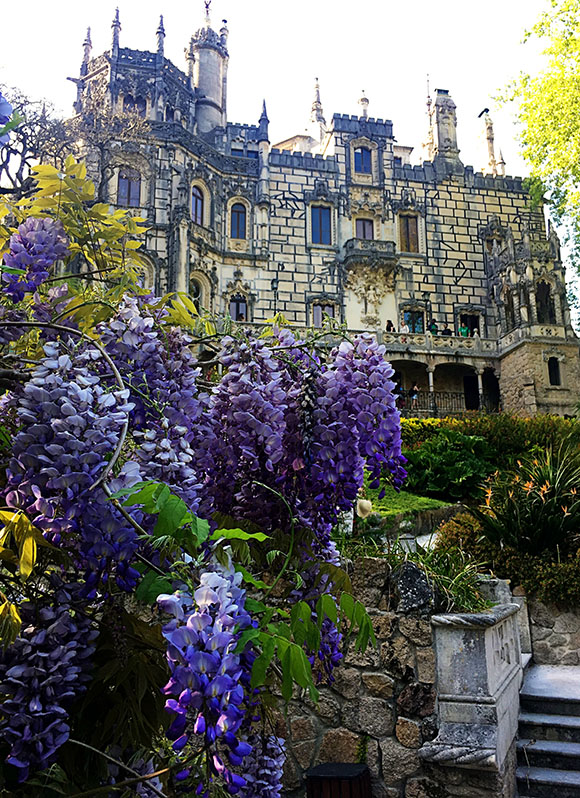 After lunch, we headed to the tourist office to ask about tickets for visiting Pena Palace and the Moorish Castle. These are the two of the most popular attractions in Sintra. We bought our tickets from the tourist office for both the palace and the castle so we were all set for the following day. I recommend doing this to ensure you avoid any long lines in the morning. That said, the line at Pena Palace the next morning was not horribly long, and there was barely a line at the Moorish Castle by the time we arrived, mid-afternoon.

From the tourist office, we walked up the main road in Sintra to Palacio Quinta da Regaleira.  It’s about a 15-minute walk, and you can just buy tickets when you arrive at the front. We grabbed a map and started to make a plan. Then just as quickly, we decided to let ourselves wander and explore randomly. The grounds are filled with walking paths, old ruins, and a few towers for the kids to climb up. We eventually found our way into a cave and the underground walkways, a series of tunnels that lead to the cave of the Orient, an inactive well and a waterfall. This was one of the coolest areas of the palace grounds to explore! 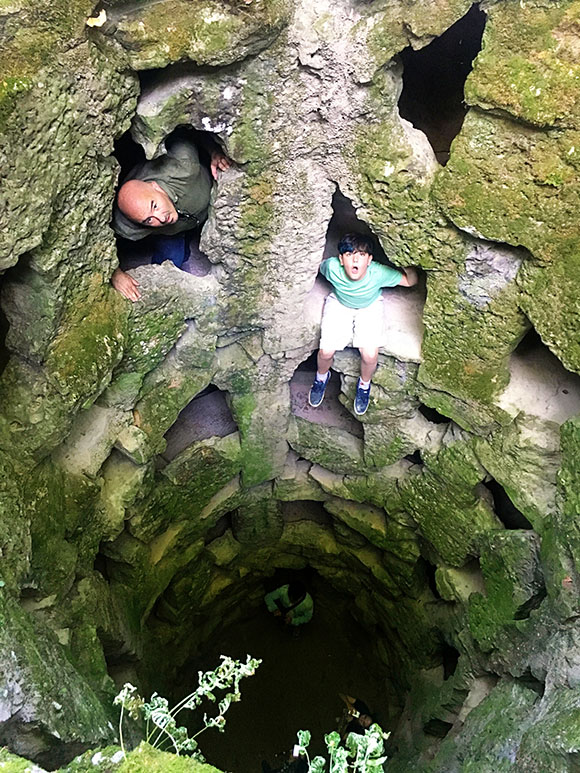 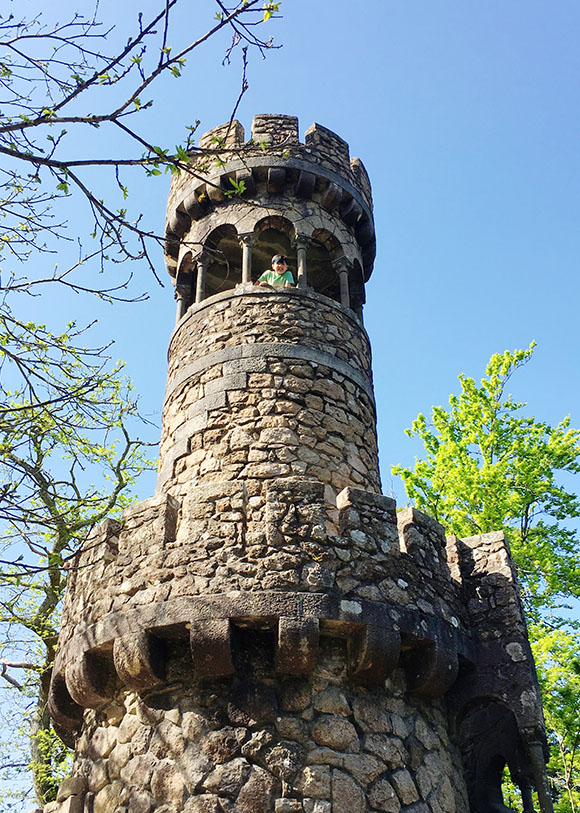 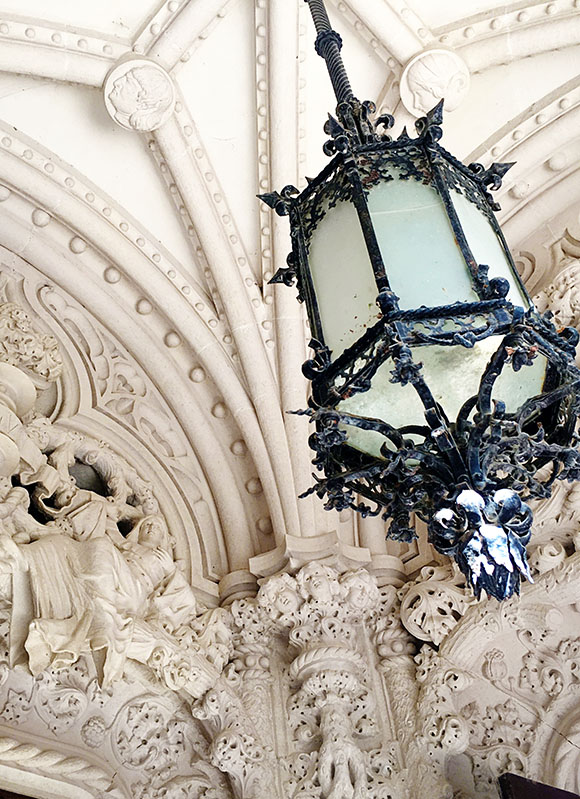 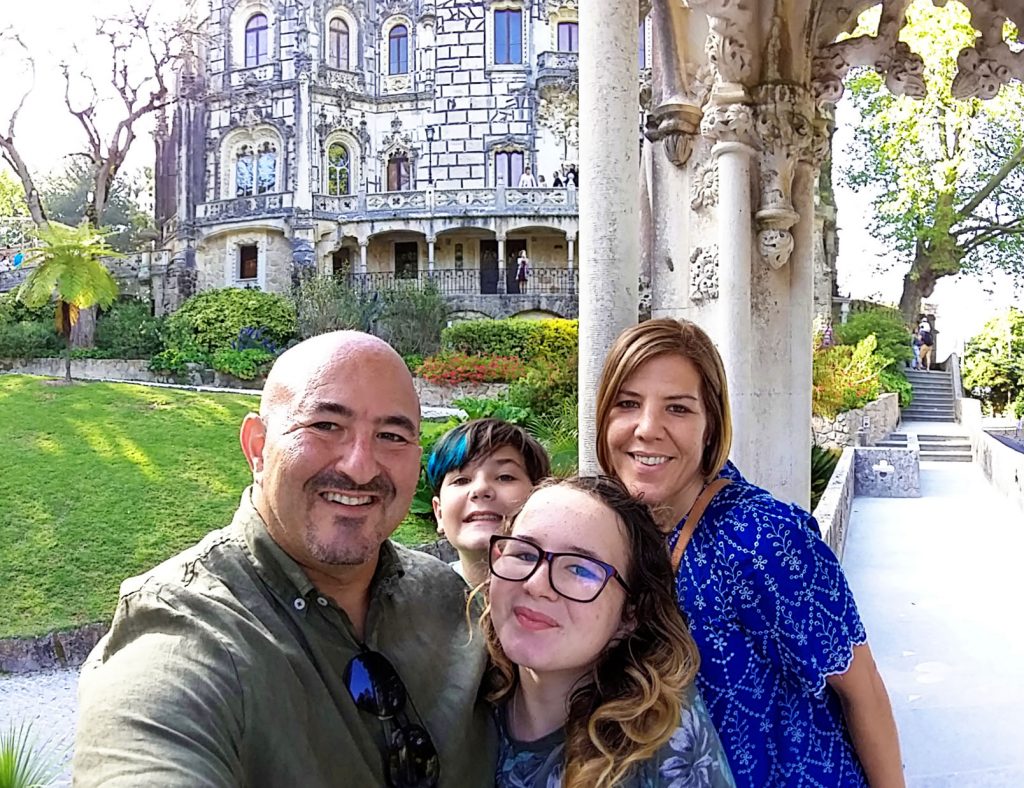 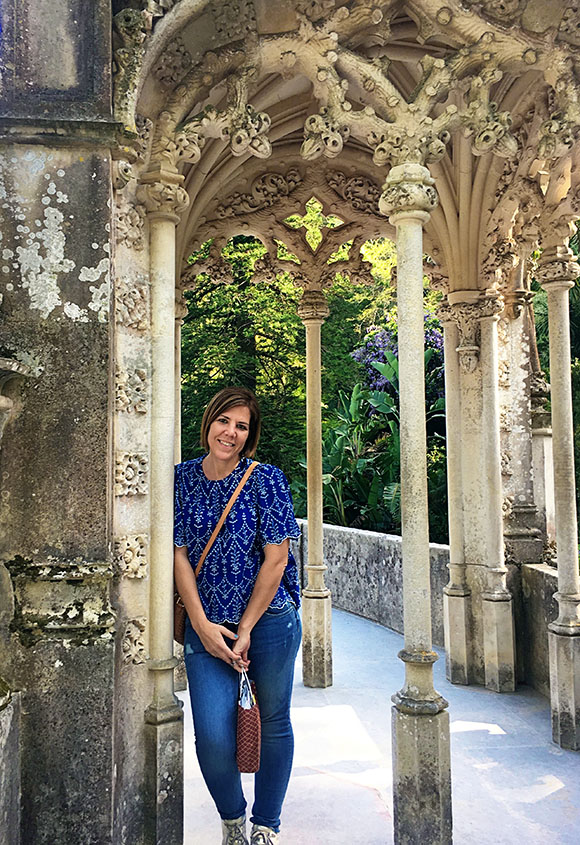 We woke up early the next morning, had a light breakfast and headed straight to Pena Palace. Don’t worry about not having a car, there are tours that will pick you up and take you up to the entrance.  There are also tuk-tuks that you can hire for about 10-15 Euros to drive you up to the top. We found parking pretty easily, but I suggest getting there early to be able to get a spot. 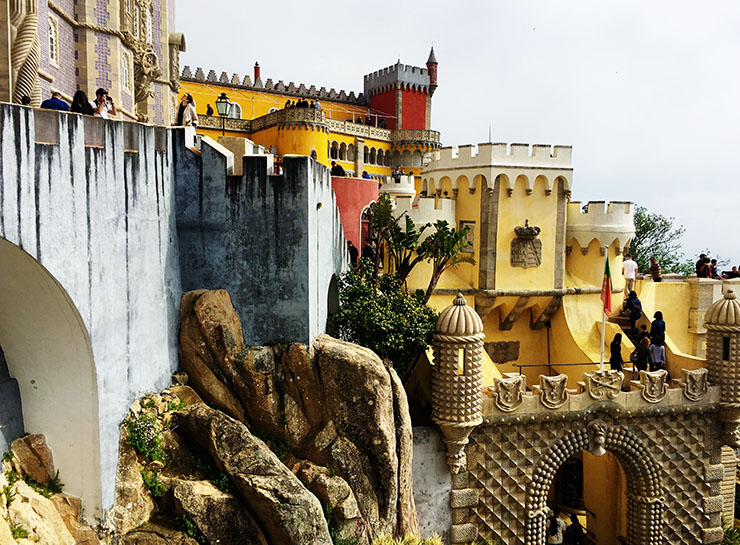 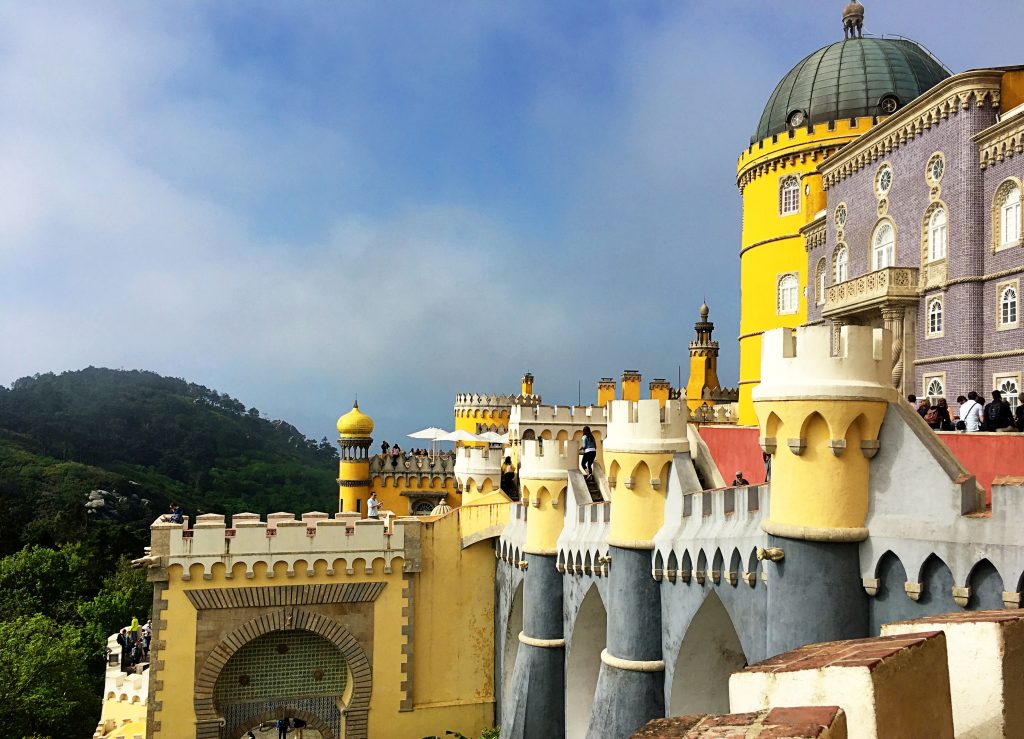 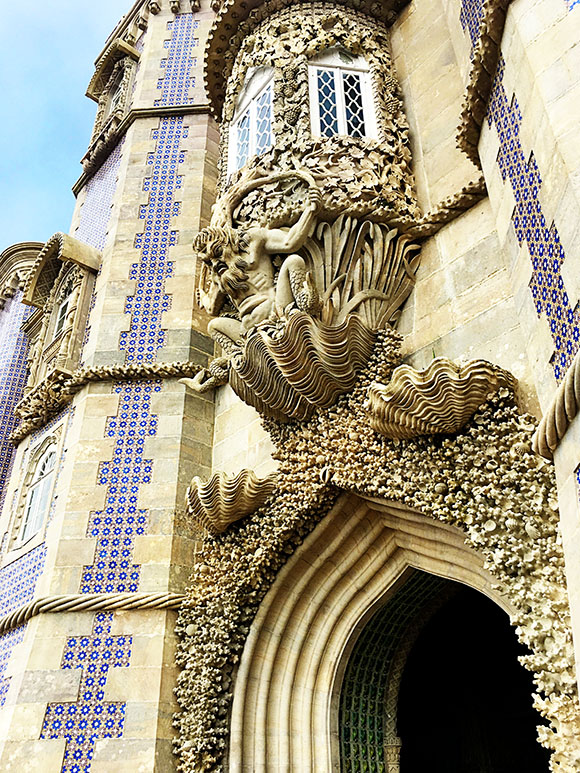 Walking up to the front of the palace was a nice 10-minute steep climb. It wasn’t as horrible as it may appear. It’s a short walk, truly. I loved seeing the palace from a distance, and as we got closer all the layers started to reveal themselves. It was a little lighter in color than I had imagined it. Perhaps that is from seeing too many filtered photos on social media.  The color palette is interesting. While I would never put these colors together, they somehow work! The Royal family built Pena Palace on the site of an old monastery, as a summer palace. Dom Fernando of Saxe Coburg-Gotha and Queen Dona Maria II acquired the old monastery and the surrounding land, as well as the Moorish Castle and a few other estates in the area in 1838.

We made our way all around the palace walls looking out at the gorgeous views. We could even see the Moorish Castle in the distance. The palace is an eclectic mix of colors, textures, tiles, and Romanticism architecture. One of the stand out pieces is the large angry-looking statue that sits above an archway leading to a large courtyard. Kids will love this guy! Apparently, he is a depiction of the Greek God, Triton.

After we made our way around the palace we headed down to explore the palace gardens. I believe we spent more time wandering the palace grounds then the actual palace.  When looking at the map of the palace gardens it can be overwhelming. There is a lot to see and I don’t think we even saw half of the grounds.

The map showed a section called the valley of the lakes, so we made that our goal and I was so glad we saw this series of lakes. It was a beautiful walk and probably my favorite part! We followed the path around the lakes down and ended up at a nice resting area with bathrooms, a snack bar, and a ticket office. You can actually start your journey here and walk up through the grounds to the entrance of the palace too. This was the perfect spot to stop and take a break. It also sits right next to the road that we needed to walk up to the entrance of the Moorish Castle. Perfect! 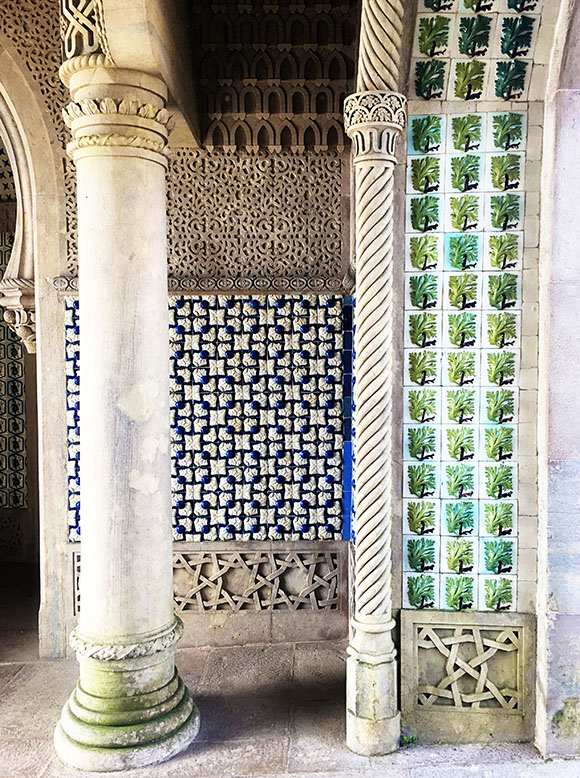 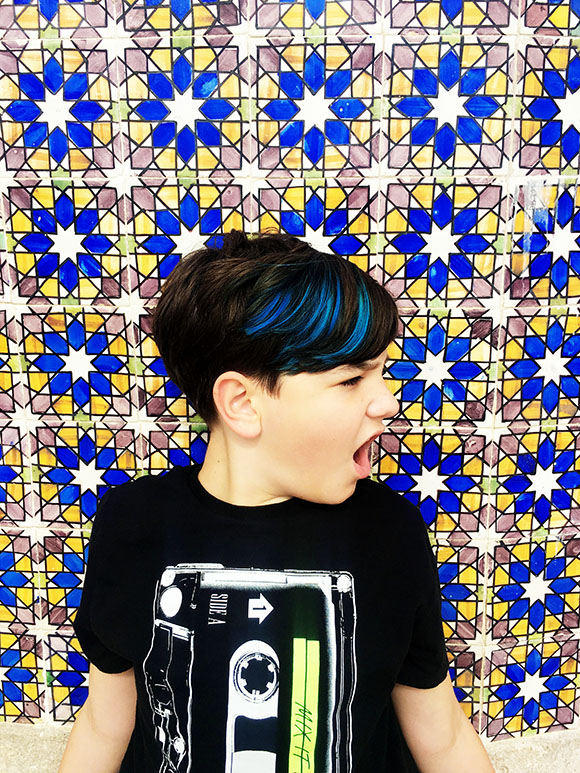 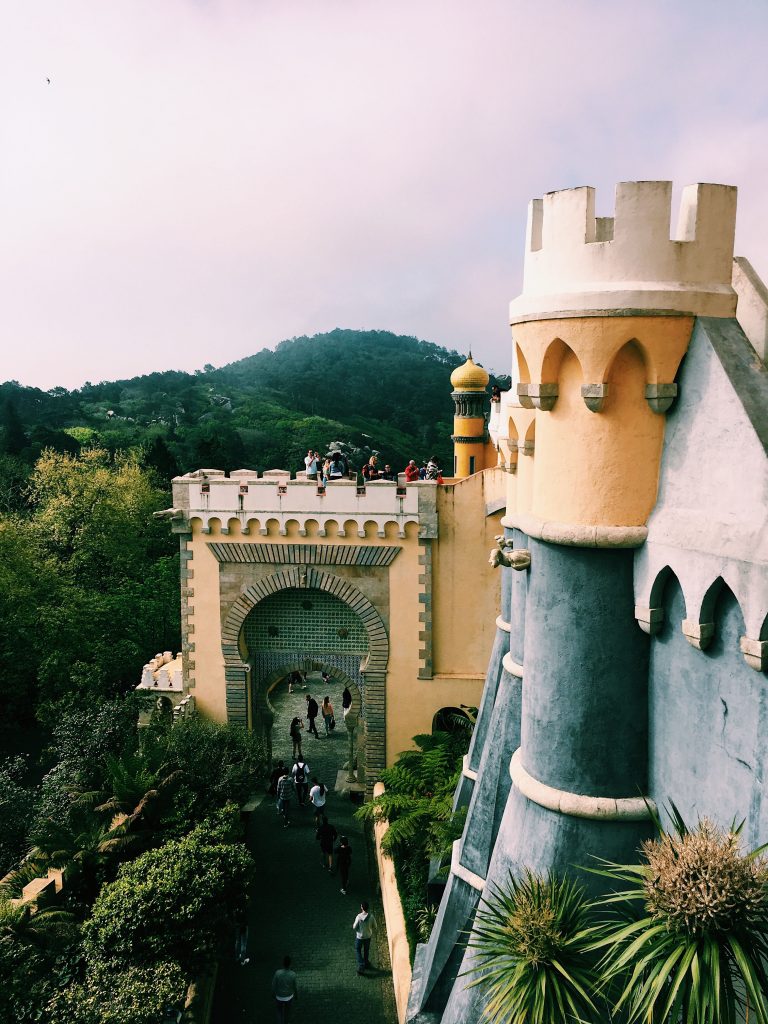 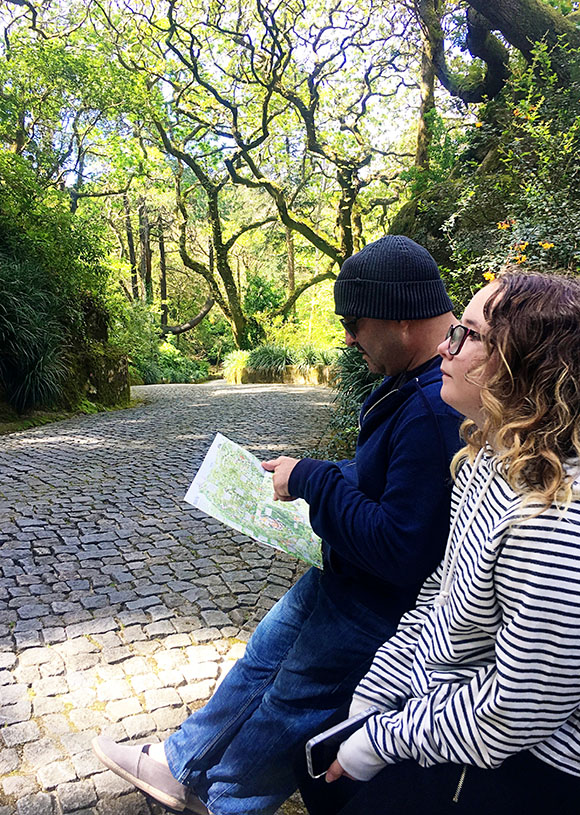 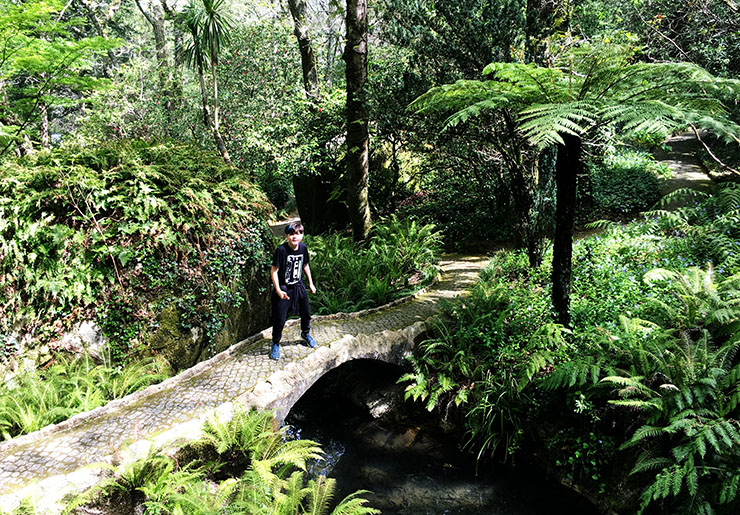 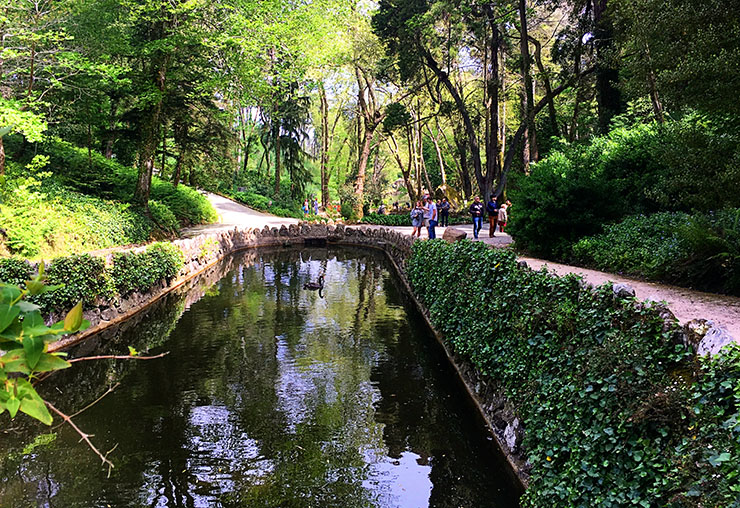 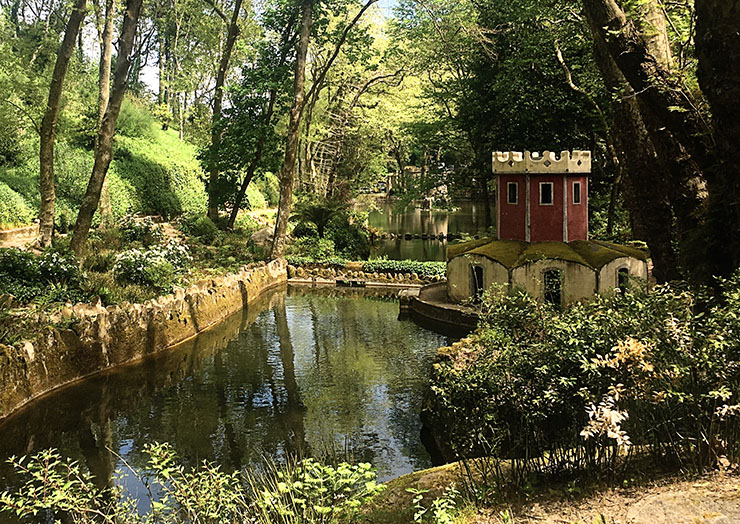 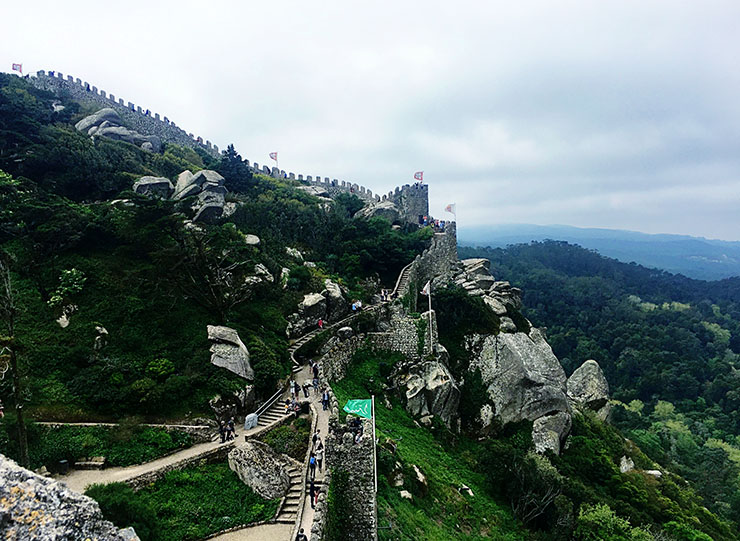 By winding our way down the bottom of the Pena Palace gardens, we walked up the steep road a little way to reach the entrance to the Moorish Castle. This was not a long walk – maybe 15 minutes, but it is a little steep. Once at the entrance, take a gorgeous walk along a paved road. You’ll come across some ruins and eventually walk up a small hill to the official ticket entrance. From here you can either go to the right which will take you to the smaller hilltop lookout first. I recommend doing this side first because the other hillside is the highest peak and look out. By going to the right first, you end up walking the entire distance of the long wall which takes you up to the highest point. If you don’t do this first, you may skip this side, having already been higher.

There is no wrong way to explore of course, so just watch your step and take in the incredible views! Along this walk, you will be able to see the city center of Sintra, the Sintra Palace, and of course Pena Palace. This entire climb with the kids was fun and it is not too intense. My daughter was tired but my son was just so excited to reach the top. I had to make him wait for me.  I was also stopping to take a million photos of the views.

The Muslims built the Castle of the Moors/The Moorish Castle as a military fortress in the 10th century. The castle was strategically built high up in the Sintra hills to protect the local territory and Lisbon. It also served to control access to the sea. 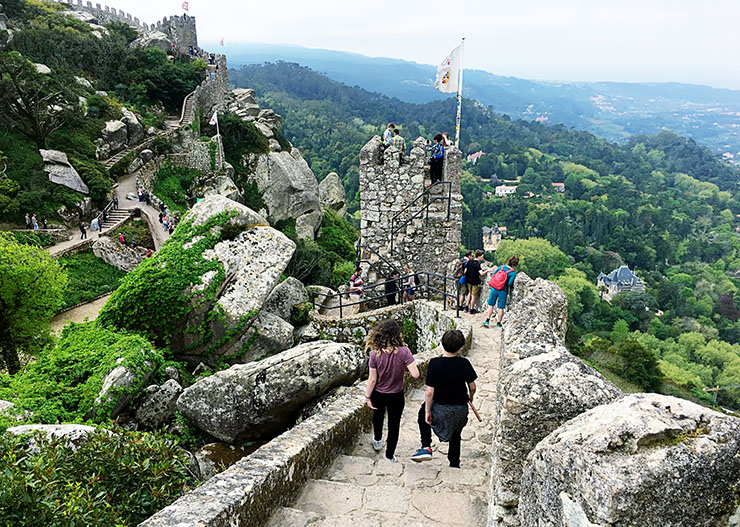 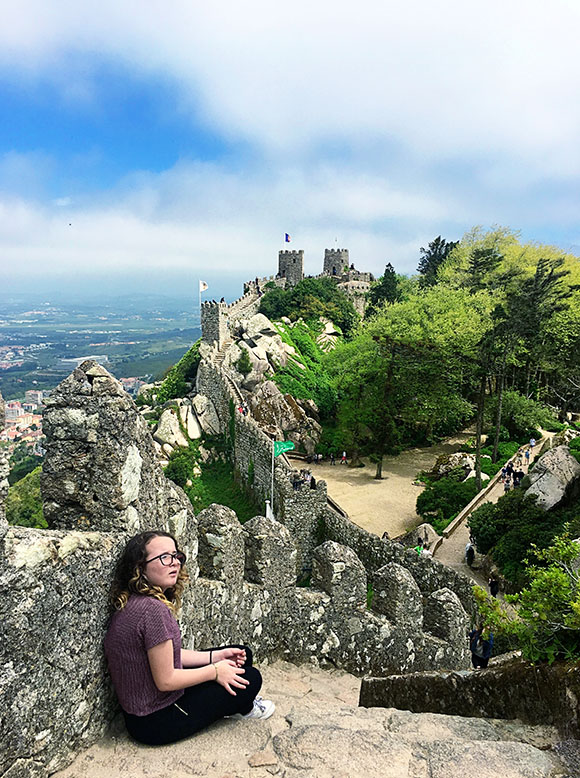 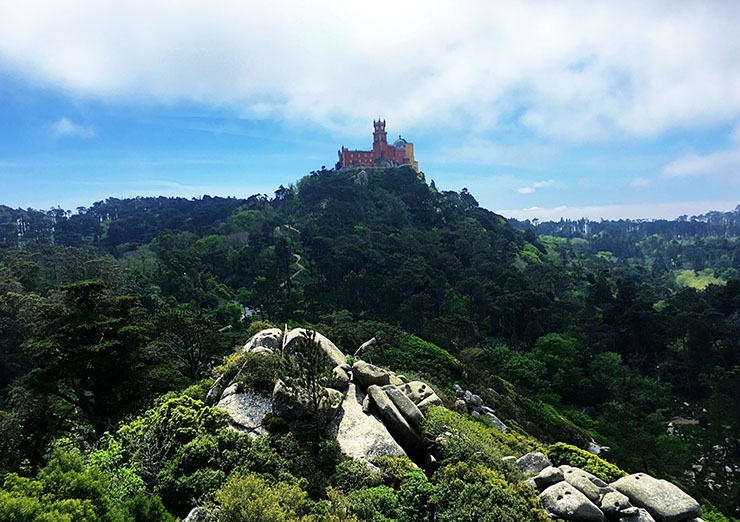 I did wonder if seeing Pena Palace and the Moorish Castle in the same day was doable with kids. Let me tell you, it totally is. You can easily do both the same day and I highly recommend it. They are very close to one another and you are already up there so just knock them both out back to back!

If you are traveling with young kids that you can carry or are pushing a stroller you will get a workout. However, a stroller at the Moorish castle will be useless if you want to climb the walls and get to the top lookout spots. It is very narrow and with rocky stairs. So bring a baby carrier for the babies and you may need to carry toddlers alongside you carefully. If you are traveling with younger children I would definitely pack a backpack with some water and snacks.

So, which one was my favorite? It’s hard to say, but I’d have to say climbing along the walls of the Moorish Castle was my favorite. I really enjoyed the climb and the incredible views. They have preserved the old fortress very well, it’s unbelievable. We spent the least amount of time at Pena Palace itself, and more time actually exploring the grounds. I also loved the mystical gardens at Palacio Quinta da Regaleria and the kids liked the underground tunnels a lot. I’m actually glad that we were able to see all three attractions. I wouldn’t change a thing about how we spent our time.